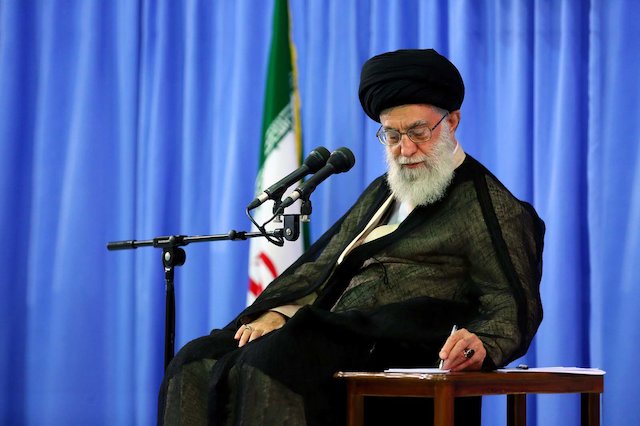 PHOTO: Iran’s Supreme Leader — “US deception should not be ignored”

In his first comment on the implementation of the nuclear deal, the Supreme Leader has maintained his line of approving the agreement while criticizing the US and limiting any interaction with Washington.

Responding to President Rouhani’s letter on Saturday’s “Implementation Day”, Ayatollah Khamenei expressed “elight that the resistance of the great nation of Iran against the brutal sanctions and the endeavors of our nuclear scientists…eventually forced the other side — some of whom are famous for animosity against the Iranian nation- to retreat and lift a part of the bullying sanctions”.

Writing specifically about the deal, Khamenei called for vigilance “that the other side fully abide by their commitments”, implicitly referring to Sunday’s imposition of new sanctions by the US against 11 Iranian entities over ballistic missile testing. He criticized any public remarks that expressed debt to the “Western side”.

Beyond the agreement, the Supreme Leader said the outcome of “resistance and struggle against the arrogant front” should be “a great lesson for all other affairs and events in the Islamic Republic”. He then targeted Washington: “I emphasize once again that the deception and breaching of commitments by arrogant states particularly the United States of America should not be ignored in this case or any other issue.”

Khamenei also declared that Iran should remain committed to a “Resistance Economy” in which it would be self-sufficient and thus insulated from pressure by the US and its allies: “The lifting of the sanctions alone is not enough for boosting the country’s economy and people’s livelihood.”

The Supreme Leader reluctantly accepted negotiations with the US and the other 5+1 Powers in autumn 2013 after he was warned of Iran’s precarious economic situation by President Rouhani. He has maintained his support of the process because of the consequences of failure.

At the same time, however, Khamenei has denounced US dishonesty and imperialism, accusing it of causing instability throughout the Middle East. He has ruled out any discussions with the US Government beyond the nuclear talks and any consideration of post-sanctions American investment.