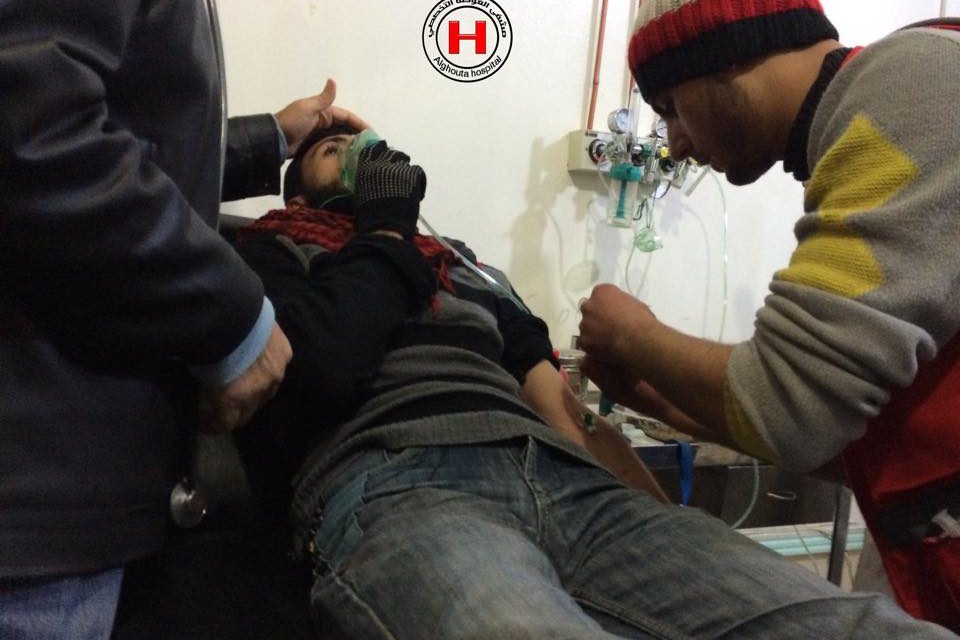 PHOTO: A victim of a regime attack in Moadamiyeh, near Damascus, is treated on Tuesday night

Claims are circulating that the Assad regime has carried out another chemical weapons attack near Syria’s capital Damascus.

Local activists say the assault was carried out on Moadamiyeh, southwest of Damascus, on Tuesday. Residents said they saw two rockets fired from the Syrian military’s positions in Mezzeh in the south of the capital.

The Local Coordination Committees say five people have died from “toxic gases”. The hospital receiving victims and the Damascus Media Center said more than 10 people are dead, including a 12-year-old.

Many more people were affected by symptoms such as shortness of breath, pinpoint pupils, incontinence, vomiting, and cramps. A doctor said more than 30 people had been treated.

The al-Ghouta Hospital has disseminated a report detailing the condition of some of the patients. It concludes:

Due to the poor potencies and lab possibilities, the medical cadre is unable to determine the type of the weapon used, but, according to our previous tragic experience in 21/8/2013 [the Assad regime’s deadly attacks near Damascus], we can tell out of the above symptoms that the city was hit with “Toxic Gases”.

The aerial assault was followed by a large ground attack by regime troops and allied militia. State news agency SANA makes no reference to any operations near Damascus, but the pro-regime al-Masdar News says reports about victims are “likely an attempt by the Syrian Opposition to attribute their losses on the battlefield to a chemical agent”.

Al-Masdar claims, from “a military source inside [nearby] Darayya, both the Syrian Arab Army and the National Defense Forces military personnel do not have any chemical weapons nor do they have the capabilities to use them”. A regime “security source” also issued a denial to AFP, “This is a cheap ruse and a broken record that [the opposition] are using in an attempt to justify their defeats.” However, the pro-Assad accounts failed to note that the rockets would have been fired from southern Damascus rather than by units in the Darayya-Moadamiyeh area.

Moadamiyeh has been besieged by the Syrian military since late 2012. A truce was reached in January 2014, but tension has continued with residents accusing the regime of continuing to restrict food and supplies and preventing movement in and out of the town.

Fighting has surged in nearby Darayya this week, with rebels claiming that they have killed and wounded a number of regime troops trying to advance. Video has shown aerial bombardment of the area between Moadamiyeh and Darayya.

In August 2013, the Syrian military used rockets filled with sarin nerve agent in attacks on seven sites to the east and south of Damascus, including Moadamiyeh. At least 1,400 people were killed.

Under pressure from the international community, the Assad regime gave up almost all of its chemical weapons stocks. However, it continued to use chlorine — which is not banned under international conventions — in canisters dropped by helicopters, particularly in northwest Syria in spring 2014.

Another video of victims: