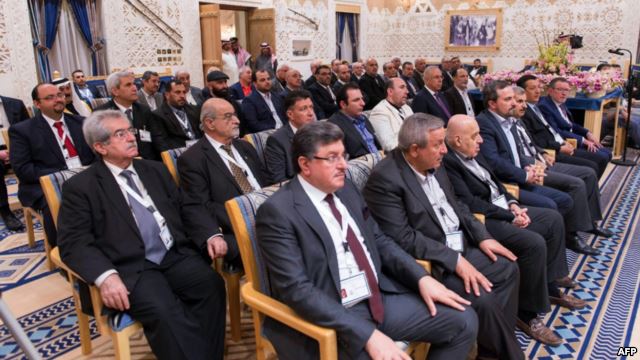 PHOTO: Delegates at the opposition-rebel conference in Riyadh, Saudi Arabia

Putin — We Are Supporting the Free Syrian Army
Talks, Ceasefires, & Kurds — An Open Letter to US Secretary of State Kerry

At the end of a two-day meeting in Saudi Arabia, Syria’s opposition and rebels groups have set out their principles for any negotiations with the Assad regime.

The groups reiterated the condition that President Assad must give up power in a transition: “The aim of the political settlement is to create a state based on the principle of citizenship without Bashar al-Assad or figures of his regime having a place in it or any future political arrangements.”

The participants supported a “democratic mechanism” — used the term rather than “democracy” because of the views of Islamist delegates — “through a pluralistic regime that represents all sectors of the Syrian people”, including women, and that does not discriminate on religious, sectarian or ethnic grounds.

The conference also made a commitment to preserving Syria’s state institutions and restructuring the army and security services.

A separate negotiating team of 15 members will be appointed and will be ready to meet a regime delegation in early January.

As the final statement was issued, there was confusion over whether Ahrar al-Sham, the largest rebel faction, had joined. The group had objected to the participation of the “regime-made” National Coordination Body and a claimed lack of representation of rebel groups, who had only 15 of the 105 delegates.

Ahrar al-Sham also said the conference had not considered rebel amendments to the statement of principles, including an insistence on the Islamic identity of the Syrian people.

Abdulaziz Sager, the Saudi academic who moderated the discussions, said afterward the Ahrar al-Sham representative at the conference had signed the final statement because he had not known about the group’s objections.

The conference was the first formal gathering of opposition and rebel groups in Syria’s 57-month conflict. However, it did not include Kurdish factions such as the Kurdish Democratic Union Party (PYD), despite US and Saudi pressure for their inclusion — instead, the Kurds held their own conference in northeast Syria.

The Free Syrian Army has claimed the capture of a village, al-Hamzat, in the latest fighting with the Islamic State in northern Aleppo Province.

The FSA said that it also fought ISIS in nearby Kafra village after an Islamic State suicide bomber detonated a car bomb at an FSA base. The explosion killed several rebels, including a Levant Front commander, Major Abu Hasan.

The FSA accused Russia of airstrikes targeted its supply lines at the Kafra front during the clashes.

Iranian media have confirmed the deaths of 13 troops in the last four days, bringing the total since October 7 to 93.

Among the latest casualties were two colonels, a major, and two 1st lieutenants.

Eight Iranian commanders have been killed since October 7, including the overall commander in Syria, General Hossein Hamedani.

An unknown number of Hezbollah fighters and Iraqi, Pakistani, and Afghan militia have also died as foreign forces supported and sometimes led six regime offensives, five of them against Syrian rebels.

Assad Sidesteps Question of Whether He Will Negotiate with Opposition

In his latest interview with foreign media, President Assad has sidestepped the question of whether his regime is ready for negotiations with opposition groups.

So, we were ready, and we are ready today to start the negotiations with the opposition. But it depends on the definition of opposition. Opposition, for everyone in this world, doesn’t mean militant. There’s a big difference between militants, terrorists, and opposition. Opposition is a political term, not a military term. So, talking about the concept is different from the practice, because so far, we’ve been seeing that some countries, including Saudi Arabia, the United States, and some Western countries wanted the terrorist groups to join these negotiations. They want the Syrian government to negotiate with the terrorists, something I don’t think anyone would accept in any country.

Following two international meetings, Russia and US are debating the list of “acceptable” opposition factions for talks (see below), while an opposition-rebel bloc was established at a conference in Saudi Arabia this week.

Assad effectively dismissed the international process, which envisages opposition-regime talks in an 18-month transition, as he said the regime’s strategy to force rebels into surrender, including sieges and bombardment, was the only acceptable resolution:

[This is] to reach a situation where they give up their armaments and either join the government or go back to their normal life, having amnesty from the government. This is the only way to deal with the militants in Syria.

The President said that Saudi Arabia is the “main supporter” of the Islamic State, and he echoed Russia’s propaganda line that Turkey is helping ISIS with the distribution of its oil — unsurprisingly, without mentioning regime purchases from the Islamic State.

He added that neither the US nor France “serious in fighting terrorism” and ISIS.

Asked if he has made any mistakes since the uprising began in March 2011, Assad said:

Firas Homsi, who ran a local youth center that closed due to a lack of funding, told Syria Direct:

After the last military campaign in Homs countryside, the school employees fled to Turkey and regime-held areas. Also, due to Russian air strikes, no one is sending their children to school….

Every day on the outskirts of Talbisa, north of Homs, I see a 10-year-old child, Ahmed, he sells 15 to 20 cylinders of gas every day. He doesn’t know how to count. When I bought 10 liters to fill up my car, it was SP350 [about $1] per liter, but he was unable to calculate it.

Homsi said of the youth center:

The children would arrive an hour before classes started. We created a great environment for them. We transformed their classes into a fun learning experience. Unfortunately, this didn’t last long. When the center closed the children were visibly saddened. When the situation improves, we will reopen and start over.

The Russian attacks are also taking a toll in northern Latakia Province, according to Muhammed al-Sheikh, the local director of education for the opposition-in-exile Syrian National Coalition:

In Jabal Akrad, 11 schools have been closed, while in Jabal Turkmen four schools have been closed. The main reason for their closures has been Russian cluster bomb strikes on Kurdish and Turkmen villages. This has caused a large wave of people to flee these villages and head to the Turkish border in search of security. These airstrikes have killed a number of students and of course damaged the schools themselves. There are now tens of empty schools and hundreds of empty homes.

Raed Fares, prominent for his role in protests in Kafranbel in northwest Syria, has challenged the rebel leader Zahran Alloush over the kidnapping of four leading activists near Damascus in December 2013:

Zahran Allosh! you are responsible of Kidnapping Razan Zaitouna and her friends #Syria #Kafranbel pic.twitter.com/XFmyBeVs2z

Razan Zaitouneh, a lawyer who led the Violations Documentation Center, her husband Wael Hamadeh, and two colleagues were abducted from Douma. Families and activists have accused Jaish al-Islam, the faction led by Alloush and based in the Damascus suburb, of involvement in the kidnapping or of failing to pursue those who carried out the attack.

Jaish al-Islam has denied the allegations.

Fares’ tweet was part of a campaign to get the case of the “Douma 4” raised at the Riyadh conference of opposition and rebel factions.

Report: 50+ Killed by Bombings of Kurdish Targets near Hasakah

Kurdish officials report that more than 50 people were killed and 69 wounded in a triple bombing of Kurdish targets in the town of Tal Tamer, near Hasakah in northeast Syria.

Redur Xelil, a spokesman for the Kurdish militia YPG, said targets included a market and a hospital: “There is massive destruction in the town, and the number killed is between 50 and 60, all of them civilians.”

The pro-opposition Local Coordination Committees said one bomb exploded in a truck in front of a courthouse linked to the Kurdistan Democratic Unionist Party (PYD). It said Kurdish police as well as civilians were killed.

Russia to US: You Are Not Naming Enough Opposition and Rebels as “Terrorists”

In the latest clash in international discussions about a political resolution, Russia has told the US and other countries that they are not designating enough Syrian opposition and rebel groups as “terrorists”.

Following the second set of international talks on November 14, Russia and the US were each supposed to organize lists of opposition and rebel factions who could participate in negotiations with the Assad regime.

The work on the two lists – both on the list of the opposition, which could be represented at the negotiations with Damascus, and on the list of terrorists — is conducted not at the pace that was expected after the Vienna meetings. And of course, the quality of this work also cannot be considered fully satisfactory.

Zakharova emphasized that “no progress is possible” without an acceptable list.

US Secretary of State John Kerry had said that a third international meeting would be convened in New York on December 18; however, the Russians later objected, saying that the talks should continue to be held in Vienna.