Syria Feature: Why is Russia Bombing My Town and Destroying Civil Society? 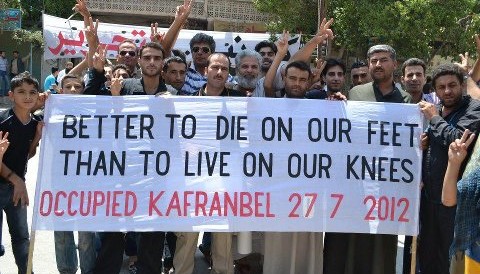 PHOTO: A message from Kafranbel in Idlib Province in northwest Syria in 2012

Raed Fares is a prominent civil society and media activist in Syria’s conflict. He is widely-known for his role in the protests in Kafranbel in northwest Syria, with their banners, videos, and murals, and is now President of the Union of Revolutionary Bureaus.

This week Fares has been speaking in the US to promote the cause of civil society and highlight the suffering of Syria’s civilians, primarily at the hands of an Assad regime which is now supported by Russian bombing.

On Friday at the Atlantic Council, Fares said:

Some people might think we were living normally before this revolution. But the reality is quite the opposite. In Syria we were all living, but we were all slaves on a plantation and those who enslaved, the Syrian Government, took away from us the very meaning of the words freedom and dignity.

The activist explains further in this column in The Washington Post:

On Jan. 29, 2014, I pulled into my driveway after a typical day of work. But after I got out of my car, a masked gunman jumped from his hiding place and fired bullets into my chest. A second gunman then appeared and fired more shots. As I lay bleeding, I felt death embrace me. I did not call for help, for fear the gunmen would return, but as I bled, I wondered what sort of twisted individuals would need to kill others to prove that they were right. No, I thought, only God has the right to remove me from life — and God ultimately saved me from their treachery.

Those gunmen, I am almost certain, were sent from the so-called Islamic State (which we refer to as Daesh because it is neither Islamic nor a state). I am a media and civil society activist from Kafranbel, Syria, a village that has gained global attention for its witty and sarcastic protest banners. We have fought the regime, we have fought extremism and we have maintained our focus on bringing a civil democracy to Syria. The Assad regime has bombed us nonstop since August 2012, killing more than 500 civilians. The Islamic State also used to attack here, raiding our offices and assaulting our activists, but its attempt to kill me was its last gasp in Kafranbel. The people of Kafranbel rose up and kicked the group out. The Islamic State has no presence here today.

Russian warplanes are attacking us anyway. They have fired missiles into a UN World Heritage site, bombed hospitals and bombarded a displaced-persons camp with artillery. They have carried out repeated airstrikes on civilian areas, killing a father and son just before I wrote this. While Russian President Vladimir Putin claims that he is bombing Islamic State “terrorists” in Kafranbel, this cannot be true, or there is no way I would be able to move about freely. Kafranbel is known for its moderation and civil activism; I know that these are Putin’s real targets.

Kafranbel residents have worked hard to advance women’s rights since Syrian dictator Bashar al-Assad’s forces left the town three years ago. We have established centers to teach women skills such as reading, computing, emergency care and civil activism. We have children’s centers that give our youths some relief from war and take them off the streets, where extremists could reach them. We even have a radio channel, called Radio Fresh, that reaches many thousands of people and broadcasts a popular program stressing that Islam is a religion of love and peace.

Yes, we still have problems with extremism here, even after kicking out the Islamic State. Unknown attackers planted a bomb next to my car last fall. In January, Jabhat al-Nusra, the Syrian branch of al-Qaeda, attacked our radio offices and the Kafranbel Women’s Center. Jabhat al-Nusra militants also arrested and beat me in December, but they could find nothing to charge me with and they had to let me go. Extremists arrested the director of the women’s center in April, but we were also able to free him. Despite the difficulties, civil society remains strong in and around Kafranbel.

If civil activism in Kafranbel declines, though, I will blame Russia. One reason for our thriving civil society is that we are being defended by Free Syrian Army fighters who grew up in the town and are firmly committed to democracy. These fighters, who have received U.S. assistance, serve as a check on any extremist groups that try to cause trouble. Russia is bombing the pro-democracy fighters of Kafranbel most heavily, almost as if it wants the extremists to grow stronger. For this reason, Russia has emerged as an enemy of civil society here. Local activists have taken the rare steps of burning a Russian flag and protesting alongside local Free Syrian Army fighters to highlight this point.

It’s hypocritical for Putin to bomb Kafranbel in the name of “fighting extremism”. Kafranbel residents have gone to great lengths to empower women; monitors note the decline of women’s rights in Russia since Putin took power. Residents of Kafranbel have worked hard to create an inclusive and tolerant atmosphere; Putin’s state priests have declared a “holy war” in Syria after less than a month of combat. I’ve been under bombardment in Syria for four and a half years without declaring a “holy war”. Why does Putin find it so hard to restrain himself?

Americans should not be so passive in the face of Putin’s farcical anti-Islamic State campaign. Kafranbel’s thriving civil society is in many ways modeled after that of the United States, and in some cases has even received U.S. funding. Putin long ago made clear that he is no fan of civil society in general, so when he assaults the free people of Kafranbel (or Ukraine), Americans should take notice. I hope that the American people will come to the defense of Kafranbel and all Syrians who are fighting for democracy, because their country’s current behavior, as a bystander to atrocities against free people, cannot possibly be a true reflection of what the United States stands for.