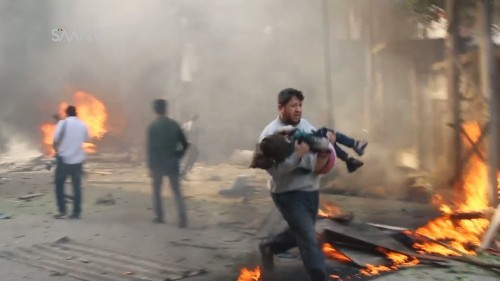 PHOTO: Aftermath of bombing of Douma near Damascus on Saturday

Airstrikes on Saturday killed dozens of civilians near Syria’s capital Damascus, with activists saying that Russian warplanes were responsible.

At least 39 people died in the suburbs of Douma, Saqba, and al-Marj, according to the White Helmets civil defense organization. The Local Coordination Committees put the toll at 44, most of them in Douma.

A resident said during the attacks:

For the past half-hour, we have been hearing warplanes roaming above us. The air strikes targeted a busy market around 15 minutes ago….

We know those warplanes are Russian because of the type of missiles that were used.

A civil defense officer said at least three air strikes targeted residential areas in the suburb, including the market, within an hour. He said that rockets were also fired on the town center.

Activist Baraa Abdurrahman posted photos from the scene, including this one of a woman among bodies, and wrote:

We still have to take horrible photos of our women just to prove to the world that Russia and the regime aren’t bombing Daesh [the Islamic State], they’re bombing our families. Douma now. 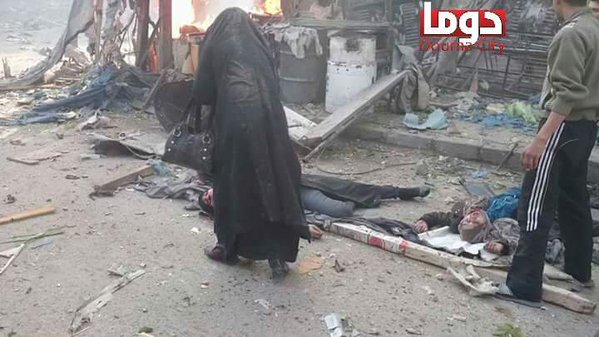 The English-language site of Syrian State news agency SANA made no reference to any airstrikes on the areas on Saturday.

The Syrian military has bombarded and besieged the suburbs for years, trying to break resistance by rebels and civilians. This summer hundreds of people were killed in Douma, and airstrikes and surface-to-surface missiles left almost 100 dead and close to 600 wounded in late October.

Aftermath of an attack on Douma:

Rescue of an injured child in Saqba:

A child is pulled from rubble in Saqba:

The Islamic State has released 37 Syriac Christians who were among more than 200 people kidnapped more than eight months ago, according to the Assyrian Monitor for Human Rights.

The organization said 27 women and 10 men, most of them elderly, arrived on Saturday morning in the town of Tal Tamr of Hasakeh province in northeastern Syria.

The Islamic State took over parts of the Khabur region in late February. In August, it freed 22 people after the intervention of the Assyrian Church.