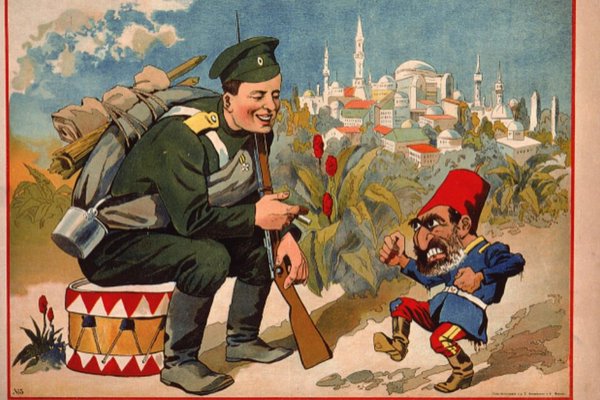 PHOTO: Russian Embassy’s poster: A remembrance of World War I or a racist jab at Turkey?

Following the Turkish downing of a Russian warplane last Tuesday, Moscow’s propaganda campaign against Turkey has been far from subtle.

There are the accusation that President Recep Tayyip Erdoğan is using Turkmen militias to seize part of northwest Syria — far from coincidentally, the same area where Russia is bombing rebels and Turkmen communities in support of the Syrian military’s ground offensive.

There have been the depictions of Turkey’s support of the Islamic State, notably through alleged purchases of ISIS oil. Even President Erdogan’s Bilal is making profits, Moscow said in its latest blast.

Russian State TV is even invoking the 17th-century monarch Peter the Great, with his injunction not to trust Turks and teetotalers. (Conveniently, Russia’s PR specialists ignored that President Vladimir Putin does not drink alcohol.)

The Russian vilification of Turkish deception and evil — in the guise of “news” — is now so common that it has become routine.

Still, Moscow’s propagandists have the power to surprise. On Thursday, the Russian Embassy in London suddenly decided that it would remember World War I:

The Embassy did not explain exactly what had happened on November 26, 1915, that merited this remembrance. Maybe it was the retreat of the Serbian Army before German attacks. Perhaps it was hostility in London to restrictions on alcohol, offering support for the wisdom of Peter the Great. Or it could be the Russian advance against Turks and Kurds to move within 40 miles of Tehran, the capital of Moscow’s 21st-century ally Iran.

Then again, this could just have been an excuse to feature a Russian soldier laughing at an angry little Turkish man.

If so, the Embassy’s calculations appear to have backfired. Twitter correspondents reflected that World War I did not turn too well for Russian soldiers or indeed for the Russian Government and the monarchy.

@RussianEmbassy This was the war which led to the end of the Russian empire and huge territorial losses. And Istanbul is still Turkey.