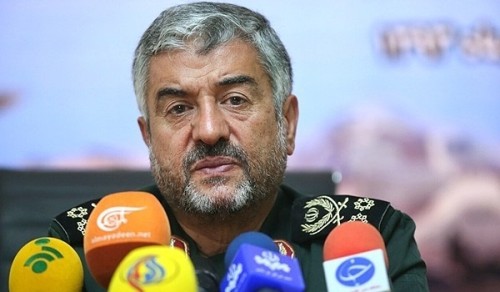 Jafari has led a hardline campaign promoting Iran’s intervention in the Syrian crisis while challenging the Rouhani Government over supposed “sedition” of the Islamic Republic. He made his latest declaration in an address to Basij militia on Friday:

One of the achievements of the Basij is weaving together popular forces and defenders of the revolution in Iran, Syria, Iraq, and Yemen. All of these forces are united. This means the formation of a single Islamic nation.

Jafari said that “God willing, this unity will continue until the arrival” of the Hidden Imam, tbe 12th Imam awaited by some Shia Muslims.

Last week the commander implicitly accused members of the Government of appeasing a US-led “fourth sedition” of Iran with their embrace of “liberalism and the West”. He continued the theme on Friday:

The enemy has tried very hard to destabilize our country. But with the strength and effort of security forces, all of these conspiracies were neutralized.

The deputy head of the Guards, General Massoud Jazayeri, supported Jafari’s line on intervention in Syria and elsewhere in the region while promoting co-operation with Moscow. He said in an interview with Russian outlet Sputnik News:

Data and field surveys show that Russia’s military action in Syria against Islamic terrorists [includes] very good work…and the impact has been considerable.

Fortunately, in today’s conditions there is good cooperation between Iran and Russia against terrorism in the region….[There needs to be] patience…but Iran and Russia will succeed.

Jazayeri said Iranian “advisors at various levels ranging from the strategic to the tactical to the operational have been present in Syria for some time”. He denied — despite the deaths of at least 60 Iranian personnel in Syria since October 7 — that Tehran had sent ground forces but said this would be “reviewed if the Syrian government requests it”.