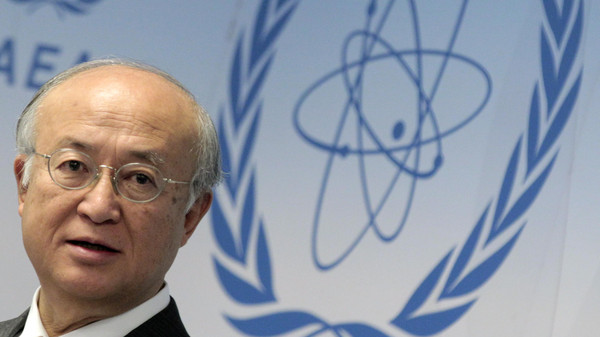 LATEST Implementing the July 14 nuclear deal with the 5+1 Powers, Iran has begun dismantling uranium enrichment centrifuges, according to the International Atomic Energy Agency.

The IAEA said in its quarterly report that Tehran has disconnected “almost a quarter” of the centrifuges. About 4,500 centrifuges were from their positions at the Fordow and Natanz enrichment sites between October 18 and November 15.

The issue has led to political in-fighting in the Iranian regime, with the Rouhani Government hoping to confirm implementation — and thus removal of US and European sanctions — by December 15 but facing hardline criticism.

The head of Atomic Energy Organization of Iran, Ali Akbar Salehi, said last month that Iran had begun taking centrifuges off-line. However, after hostile reactions from MPs and media, an AEOI spokesman said the next day that the process had not begun.

Under the Joint Comprehensive Plan of Action, Iran must decreased its stock of about 19,000 centrifuges to just over 5,000.

The IAEA report also pointed to another area where Tehran needs to establish compliance. It said that “Iran’s stockpile of low-enriched uranium had increased by 460.3 kg in the past three months to 8,305.6 kg”.

Under the JCPOA, Iran must move all of its 20% enriched uranium out of the country or dilute it. The stock of uranium enriched to less than 5% must be no more than 300 kg.

An unnamed “senior diplomat” said the recent increase in the stock was a normal fluctuation: “There is nothing special in that. It’s the normal way.”

Journalist Reyhaneh Tabatabaei has been sentenced to one year in prison for “spreading propaganda against the regime”.

Tabatabaei, who has worked for a series of reformist newspapers, has also been banned for two year from
joining political parties or writing for any newspaper or website.

Since 2010, Tabatabaei has been arrested three times and spent more than six months in Evin Prison.

Her latest “crimes” included Facebook posts that were critical of the government, her activity in the Young Reformists Election Headquarters — a group formed in 2013 to promote the election of Hassan Rouhani to the Presidency — and interviews with prominent Sunni figures such as Mowlavi Abdolhamid, the Friday Prayer Leader of the city of Zahedan.

The Communications Ministry says the social messaging application Telegram has agreed to self-censorship to ensure it “conforms to Islamic Republic regulations”.

Communications Minister Mahmoud Vaezi said the service, created by Russian exiles, would have a dedicated employee to filter out “inappropriate and immoral material”: “We asked for the blocking of obscene and immoral content of the network, and in response they have blocked it.”

Telegram co-founder Pavel Durov said last month that Telegram had resisted demands by Iranian authorities to be able to monitor those using the application.

The Media Supervisory Board subsequently said that it would not start filtering but would monitor the network for “compliance with its promises”. The board reportedly will make a final decision on the fate of Telegram next month.