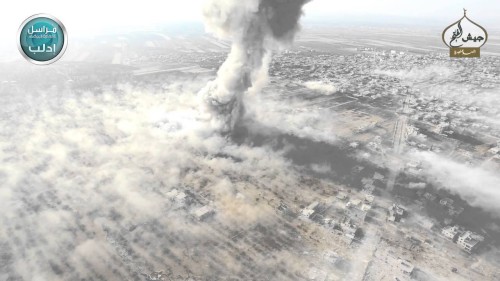 PHOTO: Smoke rises from a suicide bombing of the regime enclave of al-Fu’ah in Idlib Province on Sunday

News is breaking on Sunday night of a major ceasefire agreement between Syria’s rebels and the Assad regime, covering areas in both the northwest and south of the country.

The developments began with a specific ceasefire at noon. After rebels resumed their attacks on two regime enclaves in Idlib Province in northwest Syria last week, Hezbollah and Assad forces halted their 80-day offensive against the town of Zabadani, northwest of Damascus. In return, the rebel coalition Jaish al-Fateh stopped the assault and advance on the enclaves of al-Fu’ah and Kafraya, north of Idlib city.

The talks were pursued by Ahrar al-Sham, representing the rebels, and Iranian officials on behalf of the Assad regime. Discussions had led to a 72-hour ceasefire in August, but a ceasefire earlier this month collapsed before it could be implemented.

Then on Sunday evening, journalist Hassan Hassan reported that the two sides — with the Islamist faction Jabhat al-Nusra joining Jaish al-Fateh — had reached a far wider accord:

A 25-point ceasefire+agreement between Jaish al-Fateh (Nusra included) & Iran has been announced. Agreement is to be overseen by the UN.

Ceasefires will be followed by six-month agreements. In the south, the deal cover Zabadani and nearby towns such as Madaya; Baqeen,, and Sarghaya. In the northwest, the rebels will stop bombardment of al-Fu’ah and Kafraya while the Assad regime will stop aerial attacks on Idlib city and nearby towns like Binnish, Taftanaz, and Maarat Misrin.

Rebels, wounded, and any civilians left in Zabadani must go to Idlib Province. Women, children under 18, and men above 50 can leave Foua and Kafraya but the number is limited to 10,000.

The regime will also release 500 prisoners. Blockades will be lifted on both the regime enclaves and the areas in Damascus Province.

If implemented, the agreement is effectively a regime recognition of the opposition takeover of almost all of Idlib Province, following major advances this spring and summer. It would be the first de facto no-fly zone in Syria, following almost four years of deadly bombings and missile strikes that have propped up President Assad and the Syrian military.

More remarkably, the agreement stipulates that the regime will not fly helicopters or planes in those areas including to drop aid. NFZ!!

In return, the Assad regime gets its consolation of occupation of Zabadani, the first town taken by the Free Syrian Army in January 2012, and Hezbollah furthers its buffer zone from the Lebanese border to Damascus.

If further developed, the agreement could be a step towards a de facto partition of Syria, although the status of cities like Aleppo, Syria’s largest and inside mainly rebel-controlled territory — would be unclear.