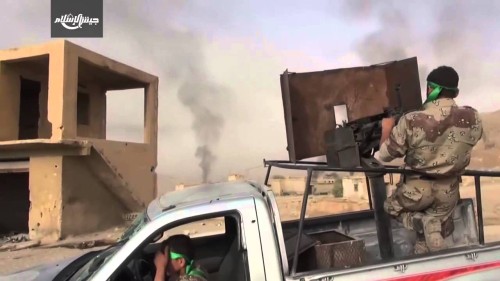 PHOTO: A rebel fighter fires on regime forces in the offensive northeast of Damascus

Rebels attacked on two fronts in Syria on Sunday, continuing their offensive near Damascus and launching operations near President Assad’s “heartland” in Latakia Province in the west of the country.

The rebel bloc Jaish al-Islam claimed more success northeast of the capital, including 20 military posts, checkpoints, and installations in the area around Adra and Harasta. These included the headquarters of the Reserve General Staff — which is 30 meters underground with a series of tunnels — a military security branch (see map); a compound for “Russian experts”; fuel stations, quarries, and cement depots; an electricity company; and a sugar factory.

A hill has been seized near the Adra Prison, which was attacked on Saturday, and another has been taken close to Dahiyat al-Assad. Attacks were also launched inside Harasta.

Rebels are claiming hundreds of casualties among regime troops, posting a list of 111 names of those killed.

The Jaish al-Fateh spokesman, Captain Islam Alloush, said the Syrian military — which was facing the offensive alongside Palestinian fighters — had been forced to call on Hezbollah reinforcements. These included Hezbollah troops who had been trying to complete the takeover of Zabadani, northwest of Damascus, after 2 1/2 months, and facing rebel attacks in southern suburbs of Damascus.

State news agency SANA makes no reference to the fighting apart from the denial that the rebels took over the women’s section of Damascus Central Prison in Adra.

If successful, the offensive would connect rebels in the East Ghouta area near Damascus with the Qalamoun region, helping to break long-time sieges by the Syrian military on the capital’s opposition-held suburbs.

After consolidating advances in Syria’s northwest, including almost all of Idlib Province and much of the al-Ghab Plain in Hama Province, rebel forces moved further to the west on Sunday with a series of attacks in northeastern Latakia Province.

Rebels claimed the takeover of several villages, with the destruction of at least five regime tanks, and fighting on the important Prophet Younis Mountain.

Takeover of the mountain would help lift the threat of a regime counter-attack on the al-Ghab Plain. Perhaps more importantly, it would open the possibility of further rebel advance into Latakia Province, considered “Assad’s heartland” — in part because of a large Alawite population, the group to which the President and his family belongs.

Regime forces running as rebels fire upon a hillside:

State news agency SANA says 17 people were killed and 70 others were injured on Monday in a double car bombing in Hasakah in northeastern Syria.

A “source at the Hasakah Police Command” said five people died and 30 were injured in the first bombing, on the northern outskirts of the city.

About 30 minutes later, a tanker rigged with explosives detonated in the west of the city, killed 12 and wounding 40.

An Islamic State assault on Hasakah was repelled this spring by the Syrian Army and Kurdish forces.

The Syrian Air Force has renewed attacks on Zabadani, northwest of Damascus, on Day 73 of a Hezbollah-regime offensive.

Activists reported that at least a dozen barrel bombs were dropped. Air operations had been restricted in the past week because of a large sandstorm over Syria.

Hezbollah and Assad troops launched the assault on Zabadani, captured by the Free Syrian Army in January 2012, on July 3. Expectations of a quick victory have been checked by rebel resistance, in the face of both the ground attacks and the hundreds of bombs.

The Syrian National Coalition says that the regime air force has also dropped 25 barrel bombs since Sunday on Darayya, south of Damascus, as Assad troops and rebels fight in the divided suburb.

Medicins Sans Frontieres puts out a telling statistic, covering only part of the Assad regime’s deadly bombardment of the East Ghouta area near Damascus this summer:

The data for the mass casualty influxes at six of the 13 MSF-supported hospitals in East Ghouta reveal 377 deaths and 1,932 wounded patients in August. Among them, 104 of the dead and 546 of the wounded were children younger than 15….

The intensity of the bombings temporarily cut some communication channels, but based on initial reports from other MSF-supported facilities, it is clear that at least 150 war-wounded patients were treated per day from August 12 to 31.

The report also documents the intensity of regime sieges on at least 600,000 people in three areas north of Damascus — al-Tal, Hameh, and Qudsaya — and on Moadamiya to the south.

Alev Hisen, a Kurdish radio correspondent in Hasakah in northeast Syria, tells Syria Direct of life and politics in the city following the defense against an Islamic State offensive this spring. With Kurdish forces vital in the defeat of the militants, Hasakah is effectively under both regime and Kurdish administrations:

Their profits only cover their tax burdens, which drives them to move from inside the city to areas under a single authority.

Shop and kiosk owners also have to obtain a double permit from the self-administration and the regime, and need two driver’s licenses.

The system also raises problems over military service for young men, as the regime tries to deal with manpower shortages and the Kurds tries to build up self-defense for their areas:

Those who have served with the self-administration are given a card that protects them from being called by the Syrian regime to perform military service if they present it.

However, there are many cases of Kurds who served in the self-administration’s mandatory service also being dragged into regime military service.

There are also cases of those who had completed regime military service and are now performing the “self-defense duty”…..

[Men] used to be able to disappear into various neighborhoods and escape service, but now every civilian has a record, so in Kurdish neighborhoods it is also the case that there is no escape. Every road leads to military service.