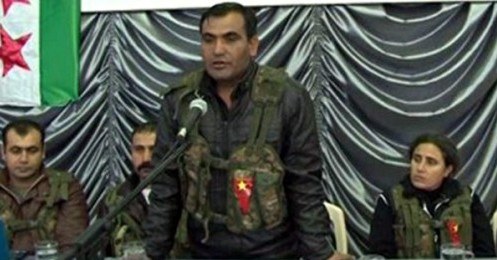 The website of Washington-based journalist Mutlu Civiroglu carries an interview with Sipan Hemo, the General Commander of the Kurdish militia YPG.

1. Kurds Did Not Cooperate with Regime Forces in Hasakah Battle Against Islamic State

Hemo refutes the Assad regime’s narrative that the Islamic State was pushed out of the northeastern city of Hasakah, after a 5 1/2-week offensive, by a joint defense between the Kurds and the Syrian military:

These claims have no basis in reality. They are patently false.

To start with, Assad regime has no power to protect Hasakah from ISIS. Salihiya, Aziziya and similar neighborhoods used to be under regime control. ISIS attacked and captured these areas from regime. I can clearly say that the regime did not contribute to liberation of these neighborhoods from ISIS.

In fact in multiple fights between Asayish [local Kurdish police force] and regime, many regime soldiers and officers died.

2. Kurds Are Ready to Join Offensive Against Islamic State’s Center of Raqqa

We fight ISIS as a matter of principle, as a service to humanity. Although our fight against ISIS has taken place in Kurdistan we are ready to aid fight against these terrorists whenever and wherever we are needed and welcomed.

Raqqa is predominantly an Arabic city. Arabs should take lead in the fight against ISIS tyranny in Raqqa; we are ready to extend a helping hand to Arabs. We advocate for the fellowship of all ethnicities and religions in Raqqa.

3. Turkey’s Attacks Are Against the Kurds, Not the Islamic State

Hemo challenge Ankara’s claims that it is trying to create safe areas in northern Syria by pushing back the Islamic State, saying that the real Turkish campaign is against the Kurds:

We are criticizing Turkey for her hostility towards the Rojava [Syrian Kurdistan] Revolution. We hoped that, instead of hostility, Turkey would be friends with Kurdish people and we extended our friendship to t
Turkey at every opportunity. However Turkey has displayed animosity towards Rojava during the last four years….

Turkey claimed she will start operations against ISIS, in reality it does not fight ISIS. Jarablus city which is under ISIS control on the Turkish border is within our eye-sight from Kobane; we have not seen any Turkish action against ISIS in Jarablus, just the opposite.

Turkey’s goal is not to protect the Turkmen [population in northern Syria] but to become a hindrance to Kurdish gains in Rojava. There are a lot more Turcoman in Latakia and Idlib. Why is Turkey not establishing a safe haven for Turkmen there? They just want to use Turkmen as an excuse to establish a buffer zone around Jarablus and prevent unification of Kobane and Afrin cantons.

In contrast to the criticism by rebels that the US is not providing adequate support for operations against the Islamic State and the Assad regime, Hemo is enthusiastic:

We have been collaborating with the United States in the war against terror with great success for a while now. We thank once again the Unites States for the close air support.

We hope to expand upon this anti-Jihadi terrorist collaboration and establish even closer relationships. All terrorist organizations are a menace to the people of Middle East and must be neutralized. We wish tocooperate with all people/nations and establish bonds of fraternity and friendship among people. We should not let all the gains against jihadi-terrorists to slip away.

I wish to emphasize here that one country in the middle-east plays an essential role in the survival and expansion of ISIS. That country is Turkey. We have shared this fact with the international public on many occasions.