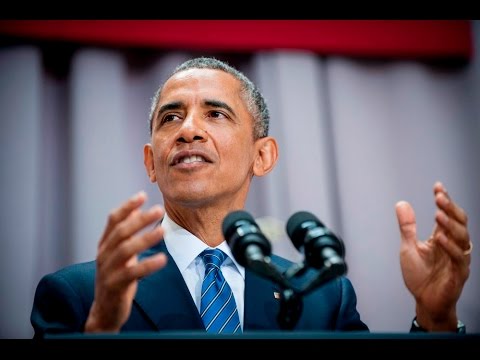 On Wednesday, President Obama used a speech at American University to promote the July 14 nuclear deal between Iran and the 5+1 Powers.

Obama’s central message, using references from the Cold War — including John F. Kennedy’s address at the same university in 1963 calling for all to prevent nuclear conflict — and the 2003 Iraq War, was that the agreement is necessary to avoid another war in the Middle East.

He issued a challenge to his critics: “Many of the same people who argued for the war in Iraq are now making the case against the Iran nuclear deal….More than a decade later, we still live with the consequences of the decision to invade Iraq.”

OBAMA: Fifty-two years ago, President Kennedy, at the height of the Cold War, addressed this same university on the subject of peace. The Berlin Wall had just been built. The Soviet Union had tested the most powerful weapons ever developed. China was on the verge of acquiring the nuclear bomb. Less than 20 years after the end of World War II, the prospect of nuclear war was all too real.

With all of the threats that we face today, it is hard to appreciate how much more dangerous the world was at that time. In light of these mounting threats, a number of strategists here in the United States argued we had to take military action against the Soviets, to hasten what they saw as inevitable confrontation. But the young president offered a different vision.

Strength, in his view, included powerful armed forces and a willingness to stand up for our values around the world. But he rejected the prevailing attitude among some foreign-policy circles that equated security with a perpetual war footing.

Instead, he promised strong, principled American leadership on behalf of what he called a practical and attainable peace, a peace based not on a sudden revolution in human nature, but on a gradual evolution in human institutions, on a series of concrete actions and effective agreements.

Such wisdom would help guide our ship of state through some of the most perilous moments in human history. With Kennedy at the helm, the Cuban Missile Crisis was resolved peacefully.

Under Democratic and Republican presidents, new agreements were forged: A nonproliferation treaty that prohibited nations from acquiring nuclear weapons, while allowing them to access peaceful nuclear energy, the SALT and START treaties, which bound the United States and the Soviet Union to cooperation on arms control.

Not every conflict was averted, but the world avoided nuclear catastrophe, and we created the time and the space to win the Cold War without firing a shot at the Soviets.

The agreement now reached between the international community and the Islamic Republic of Iran builds on this tradition of strong, principled policy diplomacy.

After two years of negotiations, we have achieved a detailed arrangement that permanently prohibits Iran from obtaining a nuclear weapon. It cuts off all of Iran’s pathways to a bomb. It contains the most comprehensive inspection and verification regime ever negotiated to monitor a nuclear program.

As was true in previous treaties, it does not resolve all problems. It certainly doesn’t resolve all our problems with Iran. It does not ensure a warming between our two countries. But it achieves one of our most critical security objectives. As such, it is a very good deal.

Today, I want to speak to you about this deal and the most consequential foreign-policy debate that our country has had since the invasion of Iraq, as Congress decides whether to support this historic diplomatic breakthrough or instead blocks it over the objection of the vast majority of the world. Between now and the congressional vote in September, you are going to hear a lot of arguments against this deal, backed by tens of millions of dollars in advertising. And if the rhetoric in these ads and the accompanying commentary sounds familiar, it should, for many of the same people who argued for the war in Iraq are now making the case against the Iran nuclear deal.