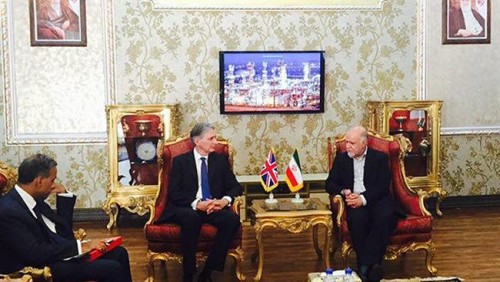 Zarif, declaring that the reopening of embassies could be a restart of Anglo-Iranian relations, continued:

Today, we entered the phase of mutual relationship based on mutual respect.

We are ready to resolve problems through dialogue on issues we have differences, like human rights.

He claimed that Tehran and London share views about fighting “extremism”, the Islamic State, and drug trafficking in the region.

Zarif then promoted the Rouhani Government’s foreign policy of “engagement”, which is being challenged by others — such as the Revolutionary Guards — within the regime:

Iran will engage with all its neighbors….If we try to gain at the expense of others, all of us will lose.

We call upon our neighbors to respond positively to this approach.

Hammond said he was “delighted” about the reopening of the Iranian and British embassies as “a first step” toward reestablishing the links between Britain’s and Iran’s people.

“Iran is and will remain a very important country in a strategically but volatile region,” he said.

The Foreign Secretary referred to talks with Iran’s Oil Minister and said that businessmen in the British delegation visiting Iran are “more than willing” to invest once sanctions against the Islamic Republic are lifted.

Fars News, the outlet of the Revolutionary Guards, headlines protests by activists and some politicians, but it emphasizes that several arrests were made to prevent disorder.

ORIGINAL ENTRY: Foreign Secretary Philip Hammond will reopen Britain’s Embassy in Iran on Sunday, almost four years after it was stormed and shut.

In the first visit to Tehran by a foreign secretary since 2003, Hammond will hold talks with President Rouhani, Foreign Minister Mohammad Javad Zarif, Speaker of Parliament Ali Larijani, and other officials.

One of Hammond’s first meetings was with Oil Minister Bijan Namdar-Zanganeh. Representatives of Royal Dutch Shell are in the British delegation.

The British Embassy will be headed by a charge d’affaires, Ajay Sharma, but Hammond said an agreement for exchange of ambassadors will be reached within months, as Iran’s embassy in London also reopens.

Reopening our embassies is a key step to improved bilateral relations. In the first instance, we will want to ensure that the nuclear agreement is a success, including by encouraging trade and investment once sanctions are lifted. Britain and Iran should also be ready to discuss the challenges we both face including terrorism, regional stability, the spread of Isil in Syria and Iraq, counter-narcotics and migration.

The British Embassy’s compound was attacked by a crowd in November 2011. Britain soon withdrew its diplomatic staff and closed the Iranian Embassy in London, expelling Tehran’s personnel.

Talks to reopen the embassies have paralleled Iran’s nuclear discussions with the 5+1 Powers (Britain, US, France, Germany, China, and Russia), which produced an agreement on July 14.

Following a meeting between Foreign Secretary William Hague and Rouhani in September 2013 at the United Nations in New York, the two countries appointed non-resident chargés d’affaires.

The high-profile diplomacy has stood in contrast to attacks by some in the Iranian regime, including the Supreme Leader, on the US and declarations that the nuclear deal will not ease confrontation with Washington in the Middle East.