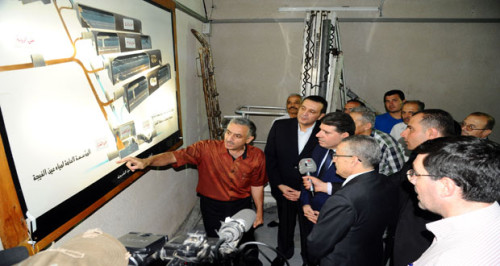 Amid stories of long-term cutoff of water in Aleppo and rebel threats to stop supplies to Damascus, Syria’s Prime Minister Wael al-Halqi has denied that there is any crisis.

Al-Halqi toured facilities in Damascus on Saturday and said that, “despite the terrorist attacks on water resources and infrastructure, nearly 70% of the water needs are being secured”.

He claimed the capital “has no problem” with supplies.

Rebels have threatened to cut off drinking water from the main spring to Damascus, located northwest of the capital, unless the regime stops the attempt by Hezbollah and Syrian forces to capture the nearby town of Zabadani.

In Aleppo, reports say that some areas of the divided city — Syria’s largest — have not received water for a month.

Al-Halqi admitted that the problem was not with a rebel blockade but power shortages affecting water pumps and filtering units. He said “about 50% of water needs are being supplied” and claimed the amount would soon be increased with “improvement [in] the electricity situation”.

Kurdish Forces: We Have Surrounded Islamic State in Hasakah City

A statement on Sunday said the YPG militia and the Women’s Defense Units of the YPJ had advanced from the south and west of the city and linked up, cutting off all Islamic State supply routes to districts such as Nashwa, Ghweiran, and the Panorama Roundabout.

Interestingly, the statement makes no reference at all to any involvement by regime forces in counter-attacking the Islamic State, which launched its latest offensive into Hasakah at the end of the June.

Pro-Assad outlets have maintained that the Syrian army and Kurdish units have coordinated the fightback. However, some reports claim that the regime, unable to defend against the Islamic State, has effectively handed over districts of Hasakah to the Kurds.

Rebels fire upon Assad fighters on the run in the Khalidiya section of western Aleppo:

The rebel coalitions Fateh Halab and Ansar as-Sharia launched an offensive at the start of July to take regime-controlled areas of Syria’s largest city. They had initial success in the al-Zahra district, taking the Military Research Center, and parts of al-Rashidin and Khalidiya; however, they have faced stiff resistance as they tried to move farther, including into the New Aleppo area.

Pro-regime media report an attack by the Syrian army and militia on rebels in the town of Kafr Shams, south of Damascus (see map).

Local sources confirm to EA that they are expecting a renewed offensive by the Syrian military, five months after a major push in southern Damascus and northern Daraa Province made only limited gains.

The February offensive was able to capture the town of Deir al-Addas, bolstering a perimeter protecting the southern flank of Damascus, but was unable to take Kafr Shams despite repeated attacks.

A regime airstrike on the nearby town of Harra on Sunday:

The Islamist faction Jabhat al-Nusra has allowed families to visit Lebanese soldiers abducted almost a year ago, during fighting in northeast Lebanon near the Syrian border.

More than 30 security personnel were seized by the Islamic State and Jabhat al-Nusra as they were pushed out of the town of Arsal by the Lebanese Army in August 2014. The hostages were taken inside Syria, where three were later executed by IS and one by al-Nusra.

Despite reports of negotiations, there has been no sign of the release of the soldiers by al-Nusra: