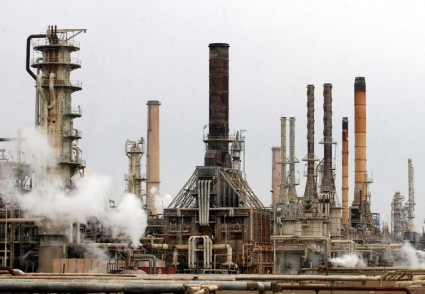 Iran has sent troops into Iraq, hoping that one of three Iraqi oil refineries can be recaptured from the Islamic State.

The confirmation of the Iranian deployment came from an unusual source: officials in the US Department of Defense said “small numbers” of fighters were involved with artillery and other heavy weapons in support of advancing Iraqi ground forces.

The officials said the Iranians are also using 122mm rocket systems and surveillance and reconnaissance drones.

The 26-square-km (10-square-mile) Baiji refinery, which handled all oil from northern Iraq, is about 130 miles north of Baghdad. It was besieged by the Islamic State last June during its rapid advance across northern and eastern Iraq, with the militants occupying the nearby town.

Islamic State are estimated to hold more than two-thirds of the complex, but about 200 Iraqi forces continue to hold out in one section.

The US military headquarters in Kuwait said Friday that the Iraqi military begun reinforcing and resupplying the forces. It claimed “steady, measured progress” in regaining some areas leading to the complex, with clearing of a ground route.

The statement did not refer to any Iranian involvement.

During his trip to Iranian Azerbaijan, President Rouhani has faced demonstrations for the lifting of house arrests on opposition leaders Mir Hossein Mousavi, Mehdi Karroubi, and Zahra Rahnavard.

The protests occurred as Rouhani met with intellectuals and the families of martyrs in the city of Tabriz. The demonstrators chanted for the President to fulfill his campaign promises to release political prisoners, and they also criticized restrictions on former President Mohammad Khatami, such as the prohibition of any reference to him in Iranian media.

Mousavi and Karroubi — both candidates in the disputed 2009 Presidential elections — and Rahnavard, Mousavi’s wife and a prominent artist and activist, have been under strict house arrest since February 2011.

General Esmail Ahmadi Moghaddam, who was replaced as Iran’s police chief in February, is being question over allegations of financial corruption.

Ahmadi Moghaddam, who held his post for more than eight years, has been in custody for two days. Another 12 senior officers are reportedly detained.

A spat has broken out among conservatives over the loss of the 2013 Presidential election to Hassan Rouhani and the “reformists”.

The dispute was stoked by the publication of a letter from Ayatollah Mahdavi Kani, later the head of the Assembly of Experts, to the Supreme Leader’s top aide Ali Akbar Velayati. Mahdavi Kani asked Velayati to give up his Presidential campaign so that conservatives and principlists could unite behind a single candidate, warning that failure to do so would bring victory for Rouhani and the reformists.

Velayati refused and votes were split among four conservative and hard-line candidates, while Rouhani took more than 50% in the first round.

Iran’s lead nuclear negotiator, Deputy Foreign Minister Abbas Araqchi, has said that the drafting of the final text of a comprehensive agreement is “very slow“.

Araqchi made the comment after the conclusion of the latest set of negotiations with the 5+1 Powers (US, Britain, France, Germany, China, and Russia), from Wednesday to Friday in Vienna. The discussions will reconvene next Tuesday.

The two sides are seeking an agreement by a deadline of June 30. Key areas are the timing of the removal of sanctions in return for Iran’s limits on its nuclear facilities, uranium enrichment, and in-country stock of low-enriched uranium.

Friday Prayer leaders across Iran repeated the Supreme Leader’s declaration, issued at a military ceremony on Wednesday, that Tehran will not allow unlimited inspections of military sites or interviews with nuclear scientists.

Ayatollah Ahmad Jannati, the head of the Guardian Council and the Tehran prayer leader, warned, “America intends to continue its domineering policies and bring Iran’s economy and politics under its control and take the helm of the Majlis [Parliament], judiciary and executive branch.”

Jannati told Iran’s negotiators that they “should consider and observe the Leader’s views, the red lines, as well as the dignity, interests, sovereignty and honor of the Islamic Revolution, Islam, and people”.

He then appeared to chide the weakness of the Rouhani Government: “Some individuals have hope and trust in the Great Satan. A bunch of naives and apathetics think that the nuclear issues are not that important.”

Ayatollah Mohammad Yazdi, the head of the Assembly of Experts, echoed the warning, “MPs must critically monitor the Government’s actions so that the it will be more careful and is not swindled in the nuclear talks.”

Yazdi also challenged the Government over cultural and social policies, including the enforcement of mandatory hijab for women:

The meaning of the motto given to this year by the Supreme Leader (Government and Nation: Empathy and Rapport) is not that government does whatever it wants and then people support them.”