Syria Audio Analysis: Jabhat al-Nusra, The Rebels, and What Happens Next 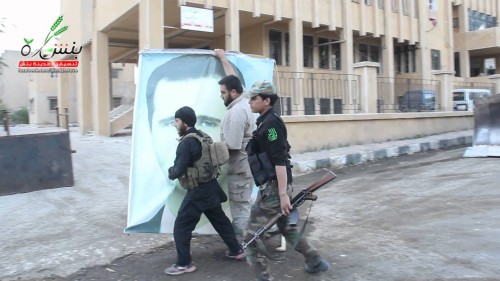 PHOTO: Rebels carry away a poster of President Assad after capturing Ariha in Idlib Province on Thursday

I followed up on this with Monocle 24’s The Globalist on Friday morning, beginning with an assessment of Jabhat al-Nusra’s relationship with Syria’s rebels and with the Islamic State.

Jabhat al-Nusra, rather than being this global group — this “Al Qa’eda” franchise — is operating more as a local group, which has some links with Al Qa’eda but is not a puppet of that organization.

Responding to a question about Jabhat al-Nusra and sharia:

Jabhat al-Nusra wants sharia law, but there is a huge debate within the rebel movement about what sharia law means. Sharia is a legal system, a social system based on Islamic principles, but that does not necessarily make sharia a terrorist system, an anti-Western system, or an evil system.

Discussion also considers why Jabhat al-Nusra split from the Islamic State, why fighters join the group, and how it has affected the US approach to Syria’s rebels:

The option for a resolution in Syria is to back the opposition with a no-fly zone and safe havens in areas which the rebels have liberated. The reason why the US has not done this is because they are scared of “extremists” supposedly dominating the movement.

The US has gone so far as to bomb not only the Islamic State but also Jabhat al-Nusra. That is not a way forward. You are not going to find an alternative to Assad, to find a way to peace, if you continue to antagonize most of the rebellion by not working with them and by bombing a group who sometimes works with them on the battlefield