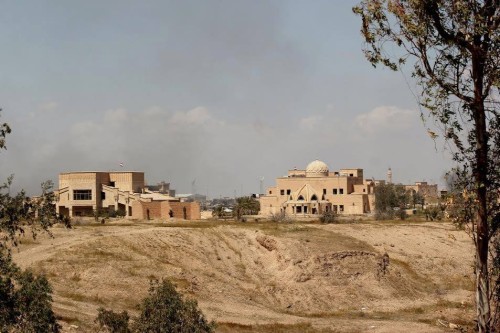 At the start of April, Iraqi forces and Shia militia recaptured the city of Tikrit in northern Iraq, taken by the Islamic State last June.

Iraqi journalist Ridha Al-Shimmari witnessed the operation. He posted this account and photos on his Facebook page after he returned from Tikrit.

The road leading to Tikrit was not fully secured. Military pockets of Daesh [Islamic State] were believed to exist in a village called Sayid Qareeb. We saw a Daesh black flag over one of the high towers near that village. Fighters of the Badr Organization [a Shia militia], who accompanied us with other reporters to Tikrit, told us that the flag was kept flying as a camouflage to distract Daesh, I didn’t understand how could they make such an announcement in a bus filled with journalists!

Samarra was our next destination before reaching Tikrit. We took some rest in the organization quarter near Samarra Dam. Then we headed to Tikrit. Although I had been to the city before, I never took the road leading to the residential Palaces. The nature was beautiful there, making it hard to believe that such a place witnessed the most terrifying atrocities in a decade or more: the Speicher massacre [where the Islamic State killed at least 1,566 Iraqi troops in June 2014].

The column was supposed to go to a mass grave of Speicher victims; but it never did so, due to security precautions or to keep the journalists on a specific track. Instead, we headed to another quarter inside the city which used to be a private philology college. Next to it was a house whose bathroom was used by soldiers. It was covered with dust, all its furniture still there. The smell from the fridge was nasty. We saw scattered school books, indicating that the household left the house in a hurry.

Hadi Al-Amiri, Badr’s leader, held a press conference. He told us that the tribesmen of al-Hawija [in Kirkuk Province in northern Iraq] visited him yesterday, asking for help to liberate their city. He also emphasized that Baiji, al-Shirqat, and Al-Hawija are the next targets before the “great” battle for Anbar [in western Iraq], assuring us that Anbar would be much easier than Tikrit because many of its tribes are fighting against Daesh.

Al-Amiri repeatedly stressed that the Tikrit victory is exceptional for two reasons. The first is related to the symbolic significance of the city. The second is related to the participation of many Sunnis from Tikrit in the liberation. He also repeatedly made it clear that the city should now be handed over to the local police forces whom we saw deployed on its outskirts, particularly in al-Qadissiya District where Daesh pockets were still present — at least when we visited the city on Thursday, April 2. 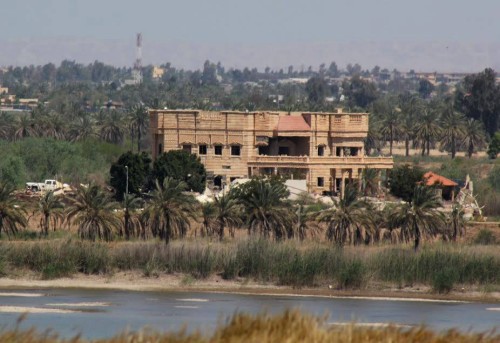 We could finally wander inside Tikrit. We went to the palaces area. Al-Farouq Palace, with a statue of Saddam [Hussein], was interesting. The bullet-scarred monument was never lifted or destroyed by Daesh despite their public hatred of the statues which they consider as idols. It was now replaced by the Badr flag.

We continued to wander inside the city neighborhoods. We saw all foreign currency exchange stores empty, with no money inside. Food stores were empty too. Some of the pharmacies were open and medicine-free, and some were closed. Most of the other shops still had their furnishings, although their windows were all broken. In many cases, the windows appeared to be broken from the inside.

I saw some volunteers in the by-ways close to these shops. Some of them were sleeping on cardboard on the pavements. We never witnessed any looting. All what we saw was a man holding a TV and going somewhere. Although he did not care about us, he seemed to be confused and frightened once he saw a car with the Badr logo behind us. He then hurried to put the TV in a nearby open shop.

I met with one of the PMU [Popular Mobilization Unit] leaders, whose small platoon took part in capturing the city. He assured me that both the Golden Division forces and the federal police had completed the final stag of liberating the city. More than 400 fighters were declaring the victory in Tikrit after a three-month siege.

Golden Division soldiers could not be found in the city as they went to Al-Maliha village, near Baiji, immediately after the liberation. Upon our return from Tikrit, I contacted one of these soldiers who told me that he was shocked to hear the news about “burning and looting Tikrit”. He kept asking me if this was true. I answered:

I saw some smoke from one of the far places. I don’t know if they were houses, but I never saw organized collective looting or a car carrying stuff, or even people taking certain things from a shop. What I did see were some empty shops.

“Yes” I said, “and some pharmacies too”.

Yes, we noticed that some of the foreign currency exchange shops and some pharmacies were empty when we first entered the city. I hate to think that I have risked my life for Tikrit to be looted, and I can’t believe this. We never lifted anything, even what was thrown on the streets. We see death every day, my friend, and never think of stealing.

Anyway, have heard today [Saturday, April 4] that [Prime Minister Haidar] al-Abadi ordered the withdrawal of PMUs from Tikrit to its outskirts. This could be an attempt to put an end to the many rumors circulated, distracting the attention from our great victory. One security analyst says we ae in danger because of these rumors and because Daesh is still close to the liberated areas, in numbers. In contrast, the number of forces existing in the librated areas is not enough to protect them. The analyst also says that we should expect a big surprise by Daesh.

Ritha Al-Shimmari also writes about one of the displaced camps he visited in Samarra. The camp was inhabited by members of the Albu Nimr tribe which lost 2000 of its people in Anbar and Salehedin Provinces at the hands of Daesh. Many of the victims were women and children.

He wrote that he met five orphan children. He asked how they lost their parents. Their eyes filled with tears, they kept silent and could not answer.