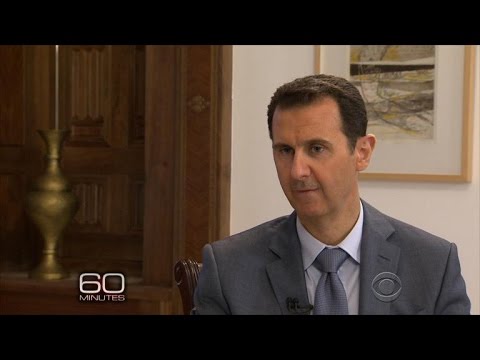 CBS News broadcast its interview with President Assad on Sunday, but the discussion — filmed last week — was already out-of-date after the rebel capture of Idlib in northwest Syria.

The US outlet’s attention was on American airstrikes and the Islamic State, rather than the rebel-Assad conflict, as Idlib exposed the diversion of its opening exchange:

Charlie Rose: How much territory do they [the Islamic State] control in Syria?

Apart from this, Assad repeated his usual lines, sidestepping the claim that 90% of civilian casualties have been caused by the Syrian army. He insisted that reports of his military’s chlorine attacks are “part of the malicious propaganda against Syria” and again said, “There is no such thing as barrel bombs.”

Interviewer Charlie Rose asks the President about Saudi Arabia, Turkey, Russia, Iran, and the US, but he never — not once — refers to the Syrian opposition and rebels.

Charlie Rose: How much of a benefit are you getting from American airstrikes in Syria reducing the power of ISIS?

President Assad: Sometimes you could have local benefit but in general if you want to talk in terms of ISIS actually ISIS has expanded since the beginning of the strikes. Not like some– American– wants to sugar coat the situation as the– to say that it’s getting better. As– ISIS is being defeated and so on. Actually, no, you have more recruits. Some estimates that they have 1,000 recruits every month in Syria. And Iraq– they are expanding in Libya and many other al Qaeda affiliate organizations have announced their allegiance to ISIS. So that’s the situation.

Charlie Rose: How much territory do they control in Syria?

President Assad: OK. As I said earlier, the war, it’s not about– it’s not traditional war. It’s not about capturing land and gaining land. It’s about winning the hearts and minds of the Syrians. We cannot win the heart and minds of the Syrians while we are killing Syrians. We cannot sustain four years in that position as a government. And me as president, while the rest of the world, most of the world, the great powers, the regional power, are against me and my people are against me. That’s impossible. I mean this logic has no leg to stand on. So this is not realistic and this is against our interests as government is to kill the people. What do we get? What the benefit of killing the people?

Charlie Rose: Well, the argument is that you — there are weapons of war that have been used that most people look down on with great — one is chlorine gas. They believe that has been used here. They said there is evidence of that and they would like to have the right to inspect to see where it’s coming from. As you know, barrel bombs have been used. And they come from helicopters. And the only people who have helicopters is the Syrian army. And so those two acts of war, which has– society looks down on as —

President Assad: It’s very important. This is part of the malicious propaganda against Syria. First of all, the chlorine gas is not military gas. You can buy it anywhere.

Charlie Rose: But it can be weaponized —

Charlie Rose: Then why doesn’t somebody come in and inspect it and see whether it’s been used or not?

Charlie Rose: — you’re happy for that?

President Assad: Of course. We all–we always ask a delegation, impartial delegation to come and investigate. But I mean logically and realistically it cannot be used as a military. This is part of the propaganda because, as you know, in the media when it bleeds it leads. And they always look for something that bleeds, which is the chlorine gas and the barrel bombs.

Charlie Rose: You do use barrel bombs? You’re just saying —

President Assad: No, no. There’s no such a thing called barrel bombs. We have bombs. And any bomb is about killing.

Charlie Rose: You have often spoken about the danger of a wider war in the Middle East.

Charlie Rose: Can you talk about the parties involved? And characterize how you see them. Let me begin with Saudi Arabia.

President Assad: Saudi Arabia is — an (unintelligible) autocracy. Medieval system that’s based on the Wahhabi dark ideology. Actually, say it’s a marriage between the Wahhabi and the political system for 200 years now. That’s how we look at it.

Charlie Rose: And what is their connection to ISIS?

Charlie Rose: So ISIS and Saudi Arabia are one and the same?

President Assad: I don’t — it’s Wahhabi ideology. They base the — their ideology is based on the books of the Wahhabi and Saudi Arabia.

Charlie Rose: So you believe that all Wahhabis have the same ideology as ISIS —

President Assad: Exactly. Definitely. And that’s by ISIS, by al Qaeda, by al Nusra. It’s not something we discover or we try to promote. It’s very — I mean their book — they use the same books to indoctrinate the people. The Wahhabi books —

Charlie Rose: What about Turkey?

Charlie Rose: And you —

President Assad: It doesn’t mean that he is a member. But he’s a fanatic.

President Assad: Is a Muslim Brotherhood fanatic. And he’s somebody who’s suffering from political megalomania. And that he thinks that he is becoming the sultan of the new era of the 21st century.

Charlie Rose: You think he could stop the border if he wanted to?

President Assad: Yeah, of course. Definitely. He doesn’t only ignore the terrorists from coming to Syria. He support them, logistically and militarily. Directly. On daily basis.

Charlie Rose: Tell us what the Russians want. They are a strong ally of you.

Charlie Rose: What do they want?

Charlie Rose: And what do they want for Syria?

Charlie Rose: And what does Iran want?

President Assad: The same. The same. Syria, and Iran, and Russia, see eye-to-eye regarding these conflicts.

Charlie Rose: And what is your obligation to both of them?

President Assad: What do you mean obligation?

Charlie Rose: What is your — what do you owe them?

President Assad: Yeah, I know. But, they didn’t ask me for anything. Nothing at all. That’s why what I said– they don’t do that for Syria. They do it for the region, and for the world. ‘Cause stability is very important for them.

Charlie Rose: You and your father have held power in Syria for how many years?

President Assad: Is it a calculation of years?

Charlie Rose: No, years. How long —

President Assad: There’s a big difference. It doesn’t matter, how many years, the question —

Charlie Rose: Well, it does matter. I mean —

President Assad: No, what’s matter for us, do the Syrians support, these two presidents, doesn’t matter is they are father and son. We don’t say George W. Bush is the son of George Bush. It’s different. He’s president, I’m president, he has support from that generation, I have support from this generation now.

Charlie Rose: But the question — how do you —

President Assad: Doesn’t matter how many. It’s not — it’s not the family rule, as you want to imply.

Charlie Rose: Why do you think that they — people in the West, question your legitimacy?

President Assad: This intervention in Syria matters. I don’t care about it, to be frank. I never care about it. As long as I have the public support of the Syrian people. That’s my legitimacy; legitimacy comes from the inside, but why? I will tell you why. Because the West used to have puppets. Not independent leaders, or officials in any other country. And that the problem with Putin. They demonize Putin because he can say no, and he wants to be independent. Because the West, and especially the United States, don’t accept partners. They only accept followers. Even Europe is not partner of the United States. That’s to be very frank with you. So, this is their problem with Syria. They need somebody to keep saying yes. Yes — a puppet. Marionette. And so on.

Charlie Rose: What circumstances would cause you to give up power?

President Assad: When I don’t have the public support. When I don’t represent the Syrian interests, and values.

Charlie Rose: And how do you determine that?

President Assad: I have daily contact with the — with the people. How could any —

Charlie Rose: So, you’re — you determine whether they support you?

President Assad: No, no, no. I don’t determine. I sense. I feel. I’m in contact with them. I’m a human. How can a human make that expectation of the population? I mean, the war was very important lab for this support. I mean, they could have — if they don’t support you, they could have — go and support the other side. They didn’t. Why? That’s very clear. That’s very concrete.

Charlie Rose: I came here after Secretary Kerry had made his remarks. My impression once I got here is that when you heard those remarks, you were optimistic. The state department backed– back a little bit, and said we still think there needs to be a new government. But you were optimistic after you heard that. You believe there is a way for your government and the American government to cooperate?

President Assad: That’s not the main point — after — I mean — regarding that statement. I think — I think the main point we could have feeling, and we hope that we are right, that American administration started to abandon this policy of isolation. Which is very harmful to them, and to us. Because if you isolate country, isolate yourself, as the United States, from being influential, and effective, and the course of events, unless you are talking about the negative influence, like make embargo, that could kill the people slowly. Or launching war and supporting terrorists that could kill them in a faster way. So, our impression is that we are optimistic, more optimistic, I wouldn’t exaggerate. That at least when they’re thinking about dialogue, doesn’t matter what kind of dialogue, and what the content of the dialogue. And even doesn’t matter for the real intentions. But the word dialogue is something we haven’t heard from the United States on the global level for a long time.

Charlie Rose: But you just did, from the Secretary of State. We need to negotiate.

Charlie Rose: Why don’t you reach out to Secretary Kerry and say, “Let’s talk”?

President Assad: Are they ready to talk?

Charlie Rose: Yeah, but can you have good relationship with a country that thinks you shouldn’t be in power?

President Assad: No, that’s not going to be part of the dialogue that I mentioned earlier. This is not their business. We have Syrian citizens, who can decide this. No one else. Whether they want to talk about it or not. This is not something we’re going to discuss with anyone.

Charlie Rose: This cannot end militarily. Do you agree with that?

President Assad: Yeah, definitely. Every conflict, even if it’s a war, should end with a political solution.