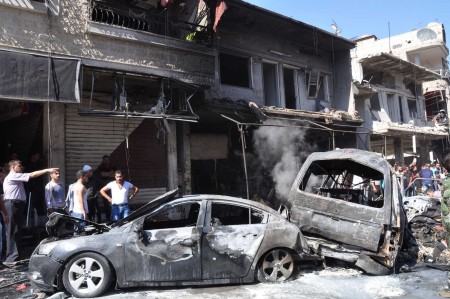 The report is “based primarily on a field investigation in November 2013…to Homs, Damascus and Damascus Countryside governorates”, after permission was granted by the Assad regime. HRW also conducted 86 interviews in person, including with victims and their family members, witnesses to attacks and their aftermath, hospital staff, regime officials ans security personnel, and militia members. The accounts were supplemented by hospital records, by more than 150 videos posted by activists and members of opposition groups, and by photographs and footage filmed by local residents and media outlets close to the Assad regime.

The report claims attacks from April 2012 in Jaramana in southern Damascus, It cites 17 bombings — 16 of which caused civilian casualties — and hundreds of artillery attacks up to April 2014. The Jaramana Council claims 11 people killed by improvised explosives, 88 by car bombs, and 35 from mortars between July 2012 and May 2013.

HRW elaborates that, in six car bombings from January 2012 to April 2014, 121 people died. It emphasizes, “In none of the six attacks did Human Rights Watch find evidence of a military target at the time of the attack.”

HRW notes “no group claimed responsibility for the car bombings in Jaramana”, but says, “Residents who spoke to Human Rights Watch believed that armed groups opposed to the government were responsible.”

Central Damascus and the Old City

Human Rights Watch cites artillery attacks on neighborhoods in central Damascus and the old city of Damascus including Qassa, Bab Sharki, and Bab Touma in which civilians were killed between January 1, 2013 and April 30, 2014. Nine strikes hit mixed commercial and residential areas; four hit at or near a hospital; six hit at or near schools, school buses, and universities; and two hit religious sites.

HRW outlines attacks that caused casualties, including one on al-Hamidiya market on November 14, 2013 that killed two people and injured at least five others.

Human Rights Watch cites three car bombings and “dozens of artillery attacks resulting in civilian fatalities and injuries” in the areas of al-Zahra, Akrama, and al-Nazha in Homs city. It acknowledges that regime forces “may have placed residents at unnecessary risk of attack by launching attacks from these areas”, but says “this would have
not justified opposition armed group attacks that were indiscriminate or caused disproportionate civilian casualties”.