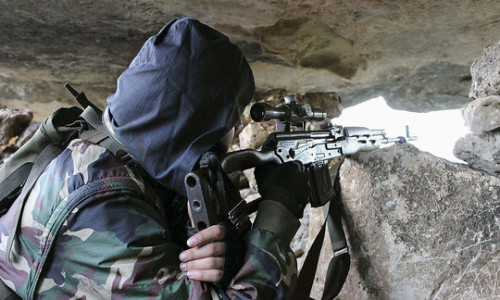 Starting School at 6:30 a.m….So Children Are Not Killed by Airstrikes

After a Wednesday of battles with regime forces, rebels appear to have captured a mountain in Latakia in western Syria.

Rebel outlets say that control has been established over Mount Dourin in northern Latakia in an offensive involving several factions.

There are conflicting claims over the fight for the village of Dourin. Opposition sources said during Wednesday that they had captured the village; however, pro-regime acocunts said the attack had been repelled with 45 rebels killed. Another activist said that the opposition had pulled out of Dourin but would continue “guerrilla warfare”.

Dourin is close to Salma, which has been held by the rebels despite sustained aerial assaults by Syrian forces.

Located on the Mediterranean, Latakia Province has been considered a base of support for the regime throughout the four-year Syrian conflict. Rebels control part of the north, however, and have launched regular attacks on Latakia city, Qardaha — the ancestral home of President Assad — and other towns throughout the province.

The Russian Foreign Ministry said on Thursday that Moscow is outraged over Western attempts to blame the Assad regime for use of chemical weapons in Syria.

“Statements by Western officials and commentaries in foreign newspapers had emerged blaming, uncorroborated, the Syrian government for incidents involving the use of chlorine gas in Syria,” the Foreign Ministry said in a statement.

The UN adopted a resolution last week that expressed concern over chlorine attacks and said those responsible “must be held accountable”. The measure followed an investigation by the Organization for the Prohibition of Chemical Weapons that documented the use of chlorine — dropped from helicopters inside barrel bombs — in spring 2014 on several occasions in April and May 2014 in Hama and Idlib Province, killing at least 14 people and wounding hundreds.

[Western governments] claim that the UN’s latest Resolution 2209 amounts to a warning to the Syrian government that punitive measures are likely in the future under Chapter 7 of the UN Charter, which is an irksome matter….[This is] a biased reading….

Had nailing down culprits in the issue been that easy, there would be no point in the OPCW mission probing the use of chlorine continuing its work.

The Ministry did not acknowledge the 32 witnesses who told the OPCW of the dropping of the chlorine from helicopters, nor did it explain that the OPCW is barred by Security Council mandate from attributing blame for the attacks.

UN: 14 Million Children Suffering from Wars in Syria and Iraq

The UN children’s agency UNICEF said on Thursday that about 14 million children are suffering hardship and trauma from the wars in Syria and Iraq.

Across Syria, an estimated 2.8 million children are still struggling to pursue some form of learning, the agency said.

The 21 aid groups say the resolutions have been “ignored or undermined by the parties to the conflict, other UN member states, and even by members of the UNSC itself”. They also challenged the body over “chronically underfunded” pledges of aid.

A UN-backed report on Wednesday said the war had plunged 80% of Syrian people into poverty, reduced life expectancy by 20 years, and led to more than $200 billion in economic losses since 2011.

The Syrian Center for Policy Research detailed the “systematic collapse and destruction” of Syria’s economic foundations, saying the nation’s wealth, infrastructure, institutions and much of its workforce have been “obliterated”.

The head of the UN refugee agency, António Guterres, said:

This worst humanitarian crisis of our era should be galvanizing a global outcry of support, but instead, help is dwindling….

With humanitarian appeals systematically underfunded, there just isn’t enough aid to meet the colossal needs — nor enough development support to the hosting countries creaking under the strain of so many refugees.

Head of Opposition Coalition: “No Will From Our Allies — A Pact of Cardboard v. Assad’s Pact of Steel with Russia and Iran”

Khaled Khoja, the head of the opposition Syrian National Coalition, has denounced purported foreign allies in an interview in France.

“The Americans don’t want to coordinate with the FSA [Free Syrian Army],” Khoja told the Guardian. “There is no will from our allies. We have a lot of allies and a lot of promises compared with what the regime has received.”

Khoja said only two countries — Russia and Iran — backed the Assad regime, while 114 nominally supported the Syrian opposition. However, referring to the 1939 alliance between Nazi Germany and Fascist Italy, he said, “They have forged a ‘Pact of Steel’…[versus] our ‘Pact of Cardboard’.”