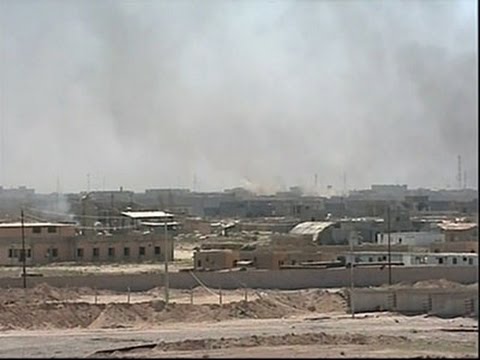 Iraqi forces and Shia militia pushed farther into Tikrit in northern Iraq on Wednesday, but the Islamic State struck back in western Iraq with 13 suicide bomb attacks against army and security positions in Ramadi.

The Iraqi offensive, launched with up to 30,000 men almost two weeks ago, advanced on two fronts on the center of Tikrit. The force took part of the northern Qadisiya district, while other units made a “rapid push” from the south.

“The forces entered Tikrit general hospital,” an official at the main command center said. “There is heavy fighting going on near the presidential palaces [of former leader Saddam Hussein], next to the hospital complex.”

The official, claiming an advance of “one street every 30 minutes”, said there were also battles around Tikrit police headquarters just south of Qadisiya. To the northwest, troops and militia clashed with jihadists in the industrial zone.

Another official said later on Wednesday that the advance had been slowed and even halted by sniper fire as well as ground resistance, with attacking forces waiting for militia reinforcements.

Raw footage from Associated Press of the offensive:

Claimed footage of Shia militia burning homes and other buildings in Albu Ajeel, near Tikrit, on Monday:

A medical source said five people were killed in the attacks, but the real figure could be significantly higher. Iraqi officials gave no estimate of casualties.

The police chief of Anbar Province maintained, “The drivers were killed and the cars did not reach their targeted points. There are bodies of [Islamic State] militants on the battlefield, the enemy suffered heavy losses in lives and equipment, and things are controlled.”

The Islamic State controls much of Anbar Province, the largest in Iraq, and holds the city of Fallujah. The jihadists have tried for months to make inroads in Ramadi, the provincial capital.