Iran Feature: MP Ali Motahari Publicly Attacked and Injured After Criticism of Hardliners — What Next? 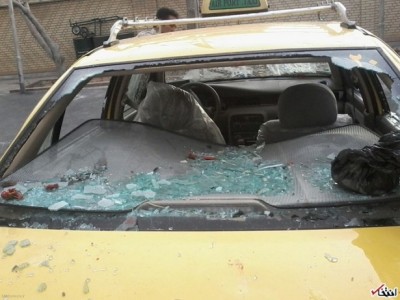 Ali Motahari, the prominent MP who has challenged hardliners over political issues and the detention of opposition leaders, has been injured in a public attack in Iran.

Motahari, whose speech in Parliament in January was suspended as he was jostled at the podium, was attacked on Monday before he spoke to students at Shiraz Univerity this week. People on motorcycles hit his car with stones, bricks, and tomatoes, with the MP suffering an eye injury.

The MP returned to Iran and said:

If one of the bricks or stones had hit me squarely, I probably would have died. Apparently they had come to kill or seriously injure me.
If it is the game of finding out who has the strongest fans, allow me to also call all my supporters to the street. Then you will see that these thugs stand no chance against them.

He then addressed Hassan Rouhani, “I urge the President to do something about the [thugs in] Fars Province.”

Motahari has provoked the ire of hardliners with repeated demands for the freeing of Mir Hossein Mousavi and Mehdi Karroubi — both of whom “lost” to Mahmoud Ahmadinejad in the disputed 2009 Presidential election — and Mousavi’s wife and activist Zahra Rahnavard from four years of house arrest. The MP has said that, if the regime wants to accuse the opposition leaders of “sedition”, it should do so in a public trial.

The Rouhani Government offered some support to Motahari with the Health Minister visiting the MP at his home and calling the attack a disaster for the country and the Islamic Revolution. The Minister said an investigation to find the people behind the attack is essential.

The reformist clerics of the Association of Researchers and Teachers of Qom also called for an enquiry in a letter to Rouhani, as did Ayatollah Bayat Zanjani: “Swearing at and attacking Ali Motahari in Shiraz is the fall of all Islamic values.” MP Ahmad Tavakoli said freedom of expression for legislators must be protected with an investigation.
.
The newspaper Jomhoori Islami challenged the Speaker of Parliament:

Mr. Ali Larijani, last week when Secretary of State talked about the circulation of dirty money in politics and elections, you criticised him. You asked, “Is this a lawless country?”

Don’t you feel responsible to support this oppressed and beaten MP? Shouldn’t you ask again if this is a lawless country?

However, not every public figure agreed. Ayatollah Asadollah Imani, the Friday Prayer leader of Shiraz, asked, “What was the necessity of Motahari’s speech [at the university]? How can anyone expect respect for a man who does not respect the Supreme Leader and the members of the Assembly of Experts?

Motahari replied in an open letter:

With the use of such words, you have supported my assailants and legalized their actions. I am glad that you have clarified your role in the accident. Surely the investigation board of the Interior Ministry of Interior should consider you as a suspect.

Based on your statement, whoever expresses an opinion against yours should be prevented from entering the city, even if it means killing or seriously hurting them.

You and your friends have released the dogs in Shiraz. If you wish to see who is stronger, allow the opposition of “this domestic Islamic State” and then you will see what happens to these thugs.