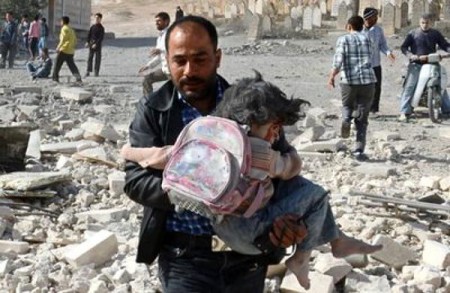 The opposition Syrian National Coalition has appealed to the UN to stop the Assad regime’s mass killing in the Damascus suburb of Douma.

At least 250 people have been killed and hundreds have been wounded since the Syrian military stepped up airstrikes and artillery attacks on February 5.

The regime has been trying — with a months-long siege, ground assaults, and bombing — to break rebels in Douma, northeast of Damascus. The town has been controlled by the opposition since late 2012.

In the letter to the UN Security Council, Coalition President Khaled Khoja cited “the slaughter currently unfolding in the Syrian suburb of Douma and the urgent need for comprehensive Security Council action to stop the Syrian regime’s atrocities, before they result in further bloodshed.” He continued:

The regime airstrikes have eased in the past 72 hours, with few civilian deaths documented in and near Damascus.

On Thursday, the rebel faction Jaish al-Islam, which is based in Douma, said it would resume rocket attacks on military positions in the capital “without warning” if the Syrian air force continued bombing.

Were 19 Regime Officers Executed by Hezbollah and Iranian Forces in Southern Offensive?

The Free Syrian Army is now claiming that 19 regime officers — earlier reported killed in the counter-offensive south of Damascus in Daraa Province — were executed by Hezbollah and Iranian forces.

The rebels say the regime officers, including a General, were slain after a dispute with the Hezbollah and Iranian commanders who have been prominent in the attempt to reclaim territory from the opposition.

Photos of the 19 officers have been posted.

Rebels are claiming that a Russian logistics officer and a senior officer in Iran’s Revolutionary Guards are among troops captured in the regime’s counter-offensive in southern Syria. 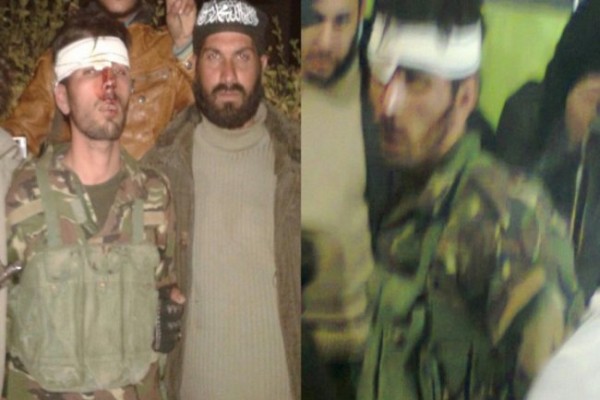 Rebel sources said the Russian officer may have been in the country to set up missile bases. If confirmed, the capture would be the first of a Russian soldier in the four-year conflict.

The Iranian officer was among a group of 40 regime soldiers captured in the fighting in Quneitra Province in southwest Syria, near the Israeli-occupied Golan Heights.

The rebels have also posted video of the Iranian commander, Lieutenant Colonel Abbas Abdollahi, whose death was announced Saturday:

Abdollahian and another Iranian special forces officer were reportedly slain in fighting near Kafr Nasij, on the 20-km battlefront south of Damascus.

The Islamic Front’s Mohammed Alloush posts the names of 19 Syrian army officers, from Latakia Province in western Syria, whom rebels claim have been killed in the regime’s counter-offensive south of Damascus.

The rebel faction Jaish al-Islam is also featuring rocket attacks on regime positions in Latakia, on the Mediterranean coast: 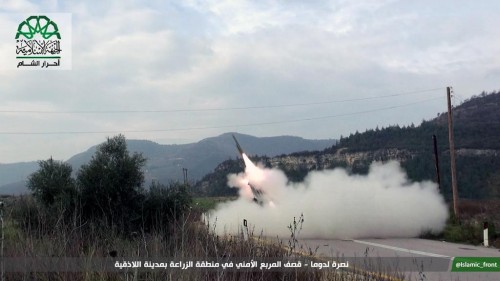 Jaish al-Islam said that rocket attacks on Damascus are “suspended” as long as the regime does not resume airstrikes on Douma, near the capital. However, the launches on regime positions in Latakia will continue.

A high school student from the Jaramana section says:

There are two branches of electricity….One branch applies rationing 4 to 6 hours per day and rarely malfunctions, and another branch gets power for 15 minutes followed by 4 to 5 hours of power cuts for the whole day. Solving this problem with those responsible for the power transformers has become an impossible dream for me.

A resident of Old Damascus summarizes:

Things have been the same for more than two years. Electricity in the old city of Damascus is sometimes cut for up to 15 hours a day. When the power returns, there begins a series of outages as a result of thefts, especially by the shabiha [pro-regime militia] and the popular committees, which are the groups responsible for the region….

I sometimes wish that my home was in al-Rawda or Abu Rummana, or in other rich neighborhoods in central Damascus, or near a police station so that I could enjoy the electricity like those who live in those areas.

Options to deal with the outages are becoming more expensive, as a resident of south Damascus explains:

The first option is to use large batteries, like car batteries, which can provide enough electricity to illuminate a few lights and the TV set for a few hours if the home installs LED lights, which are everywhere in the markets.

The second option is to buy an electricity generator running on gasoline or diesel. This option may only be available to those who can afford it. [Generator] prices rose four to five times and are now about 150,000 Syrian pounds [$800]. [The owner] must also be able to secure the diesel or gasoline, whose price rose four years ago. A liter of diesel was 120 Syrian pounds [$1] last month. It used to be 8 pounds [15 cents] in 2010. This is more than what the average Syrian citizen can afford.

Assad Regime Appeals for More Sacrifices: “Dying is A Bridge to Victory”

Effectively appealing for more sacrifices by Syrians in the four-year conflict, the Assad regime has hailed death as a “bridge to victory”.

Information Minister Omran al-Zoubi told the al-Baath Forum for Dialogue in Damascus, “Was it not for the martyrs, life in Syria would not have continued.”

Al-Zoubi said the regime has a reputation for helping and looking after martyrs’ families. He added that the values of martyrdom and love for homeland are deeply entrenched in Syrian society: “[Otherwise] martyrs who fell since the very start of the crisis until today would not have been martyred while being positioned on the front lines of their homeland’s defense.”