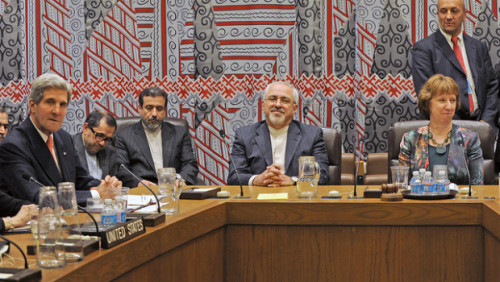 Unnamed diplomats have again fed the story of a possible “compromise” in nuclear talks with Iran to the mainstream media.

The Associated Press is the latest outlet, with two diplomats claiming a “compromise that would let Iran keep much of its uranium-enriching technology but reduce its potential to make nuclear weapons”.

Similar claims were disseminated last autumn, just before Iran and the 5+1 Powers (US, Britain, France, Germany, China, and Russia) failed to reach a comprehensive settlement by a November 24 deadline.

Last month, as talks resumed in Geneva, unnamed diplomats told Reuters that Iran was on the verge of agreeing to send most of its low-enriched uranium to Russia, reducing the stock inside the country that could potentially be enhanced for a military program. The idea never materialized publicly, and the week-long discussions in Switzerland brought no apparent advance.

Now the Associated Press is announcing that a “compromise could break the decade-long deadlock”. According to the diplomats:

*Iran retains “most” of the 10,000 IR-1 nuclear centrifuges that are currently operating ;
*The centrifuges are “reconfigured” to reduce their Separative Work Units, the output of 20% enriched uranium ;
*Iran’s storage of uranium gas, fed into the centrifuges for enrichment, will be limited ;
*Iran’s IR-2m centrifuges, introduced in early 2013 to replaced the 40-year-old IR-1 model but never activated, will still not be brought on-line
*Iran will ship out most of its 20% uranium

Significantly, the article — as with its predecessors — fails to address (and maybe even recognize) that these terms do not address fundamental gaps in the talks.

*Iranian leaders have declared that they want an increase, not a reduction, in their enrichment capability for a civil nuclear program. The Supreme Leader set the objective of a rise of almost 20 times in capacity — to 190,000 Separative Work Units — by 2021. EA sources say the Iranians have put forth a lower target in the talks, but one which is still a significant expansion of output.

AP does not explain how this can be reconciled with the claim of the unnamed diplomats that Iran’s operating capacity will be restricted in the deal.

*Like previous reports, AP does not even note the key issue of the level of the centrifuges. It makes no reference to the current IR-1s, the installed but off-line IR-2s, and the even more advanced IR-4s and IR-6s that Iran is testing.

The difference in the models is significant. IR-2s produces about 5 times the output of an IR-1. IR-4 and IR-6 models are even more efficient, and the head of Iran’s nuclear agency has even spoken of an IR-8, with 24 times the capability of the IR-1.

The failure to mention this rips apart the article. Iran could accept a figure of less than 10,000 operating centrifuges — provided that many of those are IR-2s and that the possibility of IR-4s is not foreclosed permanently. However, it is unlikely to accept any agreement which allows it to have only a reduced number of IR-1s and no models beyond these.

*Talks in 2009 — the closest the two sides came to an agreement before last year — collapsed in part because of Iran’s suspicions over the arrangements for the holding of its uranium stocks outside the country. AP does not explain how the latest proposal of despatch to Russia assuages those concerns.

Even AP takes a step back from its initial proclamation, sneaking in the line, “[The diplomats] said there is no guarantee that the proposal can be finessed into an agreement.”

Quite. The article’s significance is not that it portends a comprehensive settlement in the near-future.

Instead, its impact — unrecognized by AP — lies in the question: why are the unnamed diplomats again putting out their tale of “breakthrough”?

Is it to fend off the US Congress as it threatens more sanctions against Iran? Is it to reassure the members of the 5+1 that the Washington is still serious about getting a deal?

Or, alternatively, is it to prepare for failure — setting up the Iranians for the blame if the talks, once and for all, collapse?