US Analysis: The Big Winner of the Congressional Elections is…Hillary Clinton 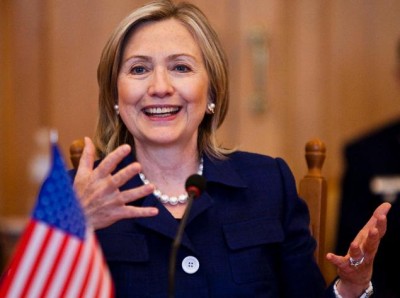 The headlines on Wednesday were blunt, “Republicans Seize Senate, Gaining Full Control of Congress“. A “Republican tide” in a “thumping win” had “upended the balance of power”, giving the GOP “the power to pin down President Barack Obama during his last two years in office”.

The new Senate Majority Leader, Mitch McConnell, proclaimed, “We will turn the country around,” after Republicans gained 7 seats in the Senate and extended its advantage in the House of Representatives.

However, beyond the rhetoric, there may be a far different story and different victor from Tuesday night’s vote — Hillary Clinton, the likely Democratic nominee for the 2016 Presidential election.

To appreciate that, one has to recognize the challenges for the Republicans after the cheering dies down.

The victory gives the GOP notable advantages. Their Senators now take the chairs of Senate committees, and they can try to set the agenda — or at least compete with Obama — over legislation.

But to turn that procedural advantage into lasting political gains, the Republicans have to show that they can be “positive” in their approach to economic and social issues

For much of Barack Obama’s six years in power, the Republicans have concentrated on attacks on the President and played the role of “spoiler”. They have been far from successful: they were unable to block key measures such as Obama’s health care reforms, and their threat to hold up the Federal budget and shut down Government in 2011 played a part in their failure to remove Obama in the 2012 Presidential election.

Voter fatigue with the Administration and the vulnerability of Democratic Senators who took office in the Obama wave of 2008 has now given the Republicans an opportunity to reclaim political high ground.

However, merely using that ground to blast Obama and “Big Government” — the theme of many of the Republican victory speeches — will waste that opportunity. The President will be gone in two years. “Big Government” is a scapegoat: the Federal Government has an essential role in much of American life, unless the Republicans want to slash the US military, Medicare and Medicaid, Social Security, and funding for Interstate highways and other infrastructure.

Similarly, trying to use Senate control to wage rhetorical attacks on supposed social evils like waves of immigrants is unlikely to pay dividends. In contrast to Britain’s heated atmosphere, most Americans do not see immigration as a threat. Nor do they, in contrast to a generation ago, want to fight battles over immigration and gay and lesbian rights. It is not even clear that they want to unravel “Obamacare”, at least in the absence of a viable alternative to deal with the continuing crisis over inadequate health care provision.

Then there is the economic hurdle that the Republicans have to clear. Whatever its defects, the Obama Administration — and “Big Government” — pulled the US out of its most serious recession in 70 years. Unemployment is dropping, the housing market is regaining strength, and the stock market has not collapsed but has hit new highs.

The “positive” alternative for the Republicans is to put forth an economic and social agenda which looks toward consensus and progress, promising a sustained recovery. But the omens are not good: the closest the GOP came was its “Path to Prosperity” plan of 2012, and that collapsed amid Obama’s second-term victory and divisions among Republicans over budget cuts and changes to Medicare and Medicaid.

On Wednesday morning, Republican commentators were trying — in lieu of a plan — to spin individual measures as their salvation of the US. For example, they were pushing the controversial Keystone oil pipeline from Canada to Texas as the salvation for unemployment.

That may be short-term political capital, but it is no substitute for a constructive, comprehensive approach. And what is most likely is a continuing “gridlock” in Washington, with the Republicans blocking any ambitious Obama legislation while not advancing any measures which can overcome a Presidential veto.

Which brings us to Hillary Clinton and the 2016 Presidential election. Having lost the Democratic nomination to Obama in 2008, she is likely to run with a united Party and a lot of money behind her. She will keep a careful distance from the Obama Administration, while decrying the Republican majority in Congress for its “gridlock” politics. She will invoke the economic good times of the President Clinton — her husband Bill — of the 1990s.

And unless the Republican Party can find a “positive” strategy and candidate to counter this, they are likely to fail in their attempt to regain the White House.

A historical lesson: in 1994, the Republicans put out a “Contract for America” and celebrated an “epic slaughter” of the Democrats, gaining 9 Senate and 50 House seats.

The “Contract” was never implemented, as the GOP threatened to halt Government operations.