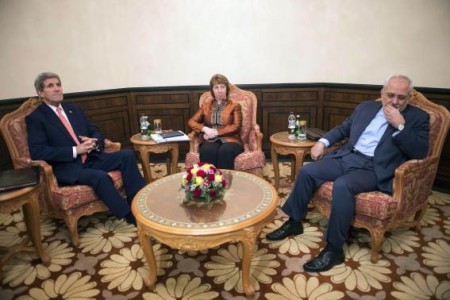 The officials were hoping to close significant gaps between Iran and the 5+1 Powers (US, Britain, France, Germany, China, and Russia) before a plenary session seeking a comprehensive nuclear agreement.

Interim arrangements over Iran’s nuclear program expire November 24. Key issues remain the number and level of Iran’s centrifuges for uranium enrichment, the lifting of US-led sanctions, and the duration of an agreement.

Negotiations in the past two days and discussions were very useful. But we are not still in a position to say that we have made progress. It’s yet to be done in the coming days. We would be available as much as needed here in Oman or in any other places before the deadline of 24 of November. We are still hopeful.

In Oman, no details were released of the talks as the participants put out brief holding statements. Asked if an agreement would be reached, Zarif replied, “We will eventually.”

The US State Department said that the talks had proven “tough, direct and serious” and that “there is still time” for progress.

The political directors of Iran and the 5+1 Powers will now meet in Oman before the plenary session beginning November 18 in Vienna.

Meanwhile, Press TV has switched from optimism to pessimism in its lead story, “US Repeats Anti-Iran Rhetoric Amid Nuclear Talks“:

The United States has once again resorted to anti-Iran rhetoric to curry favor with Israel amid the ongoing nuclear negotiations with Tehran.

Just as nuclear talks between top nuclear negotiators of Iran, the US and EU was underway in the Omani capital, Muscat, US Vice President Joe Biden elaborated on Washington’s stance on Iran’s nuclear energy program while addressing the Jewish Federations of North America’s 2014 General Assembly in the state of Maryland on Monday.

“I’ve heard so much malarkey about our position on Iran. Let me say it to you clearly in Bidenesque way: We will not let Iran acquire a nuclear weapon. Period. Period. Period,” Biden said.

The coverage is a marked shift from Monday’s Twitter campaign by the regime, which defined the Supreme Leader’s support for the nuclear talks.

Under pressure from hardliners inside and outside Parliament, Culture Minister Ali Jannati has banned a film about a student expelled from university.

Reza Darmishian’s I Am Not Angry is one of several films that have been targeted recently by the hardliners. MPs had threatened Jannati with questioning and even impeachment if he did not act.

A Ministry spokesman that, although official orders to make changes to the film were carried out, “The minister is still not satisfied” that the movie can be screened.

He added that the permit for the film was issued under the Ahmadinejad administration and therefore the film “must now meet the current criteria for the Ministry of Culture”, ensuring that it “is not harmful to the system”.

The film depicts the story of Navid, a university student, who is blacklisted for attending the mass protests after the disputed 2009 Presidential elections and is expelled from university.

Many university students were barred from further education amid the protests, and professors were fired.

The Rouhani administration had moved to reinstate many of the students and the professors. Hardline MPs responded by forcing the dismissal of the Science and Higher Education Minister and replacing President Rouhani’s nomination of a successor.

Mohammad Javad Larijani, the judiciary’s senior official for human rights, has declared a new initiative in a Monday address to ambassadors and officials of “developing countries”:

Human rights and human dignity belong to all human beings and for the same reason we should have multicultural human rights and all countries should cooperate to produce new contents for the issues related to this.

Larijani brushed aside criticism of Iran’s human rights record, for example, by UN Special Rapporteur Ahmad Shaheed — who has been denied entry to the Islamic Republic: “How can we admit a rapporteur who terms terrorists convicted of bombing and terrorist acts as advocates of human rights while this should be a cause of regret for the United Nations?”

Shaheed’s reports — based on documents, interviews with Iranians by phone inside the country as well as those abroad, and the work of human rights organizations — has set out the executions, widespread detentions, and denial of free speech and communication in Iran.

Larijani insisted that the condemnation of Iran is political: “The western countries…have been put in a situation that other countries can easily criticize their human rights misbehavior and this is not favorable to them at all.”