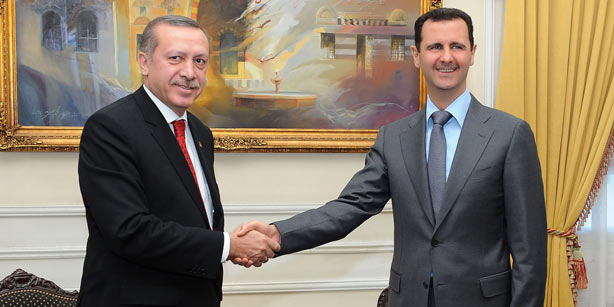 UPDATE 2105 GMT: Turkey’s Parliament has passed the Government motion for intervention in Syria by a vote of 298 to 98.

MPs of the ruling Justice and Development Party and of the Nationalist Movement Party voted in favor of the motion. It was opposed by legislators of the Republican People’s Party and the pro-Kurdish People’s Democracy Party.

Defense Minister İsmet Yılmaz linked the intervention to the fight against both the Islamic State and the Assad regime:

The threat against Turkey has gained a new dimension. It’s our obligation to take measures against this threat and to protect our citizens in the frame of international law….

The main source of ISIL is the Syrian regime.

UPDATE 0815 GMT: Abdullah Ocalan, the detained leader of the Kurdistan Workers Party (PKK), has added to the pressure on Turkey’s Erdoğan Government and Parliament to intervene in Syria.

Ocalan warned that peace talks between the PKK and Ankara will break down if the Islamic State takes over the mainly-Kurdish town of Kobane in northern Syria, near the Turkish border: “If this massacre attempt achieves its goal, it will end the process.”

Turkey’s Parliament votes today on the Erdoğan Government’s proposals to step up the fight against the Islamic State — and also the Assad regime.

The Government is proposing the establishment of safe havens inside Syria. Ankara would prefer the area to be manned by an international force on the ground and in air, but is prepared to provide security with Turkish troops alone.

The havens would be in territory currently controlled by insurgents. To avoid confrontation, no attempt will be made to establish safe zones in areas now occupied by Kurdish forces or the Islamic State.

The Turkish Government is also ready to allow foreign forces to use its bases, having rebuffed an American request to do so when the US launched airstrikes inside Syria on September 23.

On one level, the measures are the Erdogan Government’s response to the Islamic State’s offensive across northern and eastern Syria since the spring. The specific catalyst has been the jihadists’ seizure of scores of villages around the key Kurdish town of Kobane in northern Syria.

The offensive spurred the flight of 130,000 refugees into Turkey, with the prospect of more if Kobane falls. The military situation also has complicated President Recep Tayyip Erdoğan’s political negotiations with Turkish Kurds.

The Government’s motion says Turkey will “defeat attacks directed toward our country from all terrorist groups in Iraq and Syria”:

The terrorist elements of the outlawed Kurdistan Workers’ Party [PKK] still exist in northern Iraq. On the other hand, the significant increase in the number of other terrorist elements in Syria and the threat posed by them in Iraq is also alarming.

However, the more important signal is that Turkey is renewing its campaign for the overthrow of Syria’s President Assad. Erdoğan, with a visceral desire to defeat Assad, has been checked by the caution of the US and complications in support of the Syrian insurgency and opposition; however, the current crisis has given him the leverage to press the attempt — even if Washington is still hesitant.

Turkey made this clear when it rejected the US request for flights from Turkish bases, objecting that the Americans were only proposing a campaign against the jihadists and leaving the Assad regime alone.

Erdoğan reiterated the message on Wednesday, saying the foreign troops could now use the bases, provided the objective included Assad’s removal:

We are open and ready for any cooperation in the fight against terrorism. However, it should be understood by everybody that Turkey is not a country in pursuit of temporary solutions, nor will Turkey allow others to take advantage of it.

The Parliamentary debate will be held behind closed doors, with a vote expected by the end of Thursday.

Claimed footage of demonstrators calling for the resignation of Homs Governor Talal al-Barazi after Wednesday’s double bombing near a school in Homs that killed at least 32 people and injured 115 (see earlier entry):

Reports circulating tonight claim that the Islamic State is on the verge of entering the Kurdish center of Kobane in northern Syria, following a two-week offensive.

Footage of Kurdish fighters trying to hold off the jihadists:

Who Detonated the Homs Bombs That Killed 32 People and Injured 115?

With no group claiming responsibility for the double bombing near a school in Homs on Wednesday, killing at least 32 people and injuring 115, competing allegations are circulating over the culprits.

State media and officials say “terrorists” set off a car bomb, followed by a suicide bomber’s detonation of explosives.

However, opposition activists say the car that was detonated had Syrian military plates and passed checkpoints shortly before it parked near the school.

Footage of Islamic State fighters as they press their offensive on the Kurdish center of Kobane in northern Syria:

The jihadists began their offensive last month, taking scores of villages to the west, south, and east of Kobane. They are reportedly within 10 kilometers (6 miles) of the town, the center of one of three Syrian Kurdish cantons.

At Least 32 Killed By Bombs Near School in Homs

State media says the death toll has risen to 32, with at least 115 wounded, from Wednesday’s double bombing near a school in Homs.

Most of the slain are children.

A Syrian official said a car bomb was followed by a suicide bomber who detonated his explosives as children were leaving the school.

No one has claimed responsibility for the blasts. However, Prime Minister Wael al-Halqi blamed unnamed insurgents:

These terrorist acts, in which terrorists have taken their hatred out on our schoolchildren, are meant to discourage Syria’s children from pursuing knowledge….

[This] will make us even stronger and more determined to restore security and stability all over Syria.