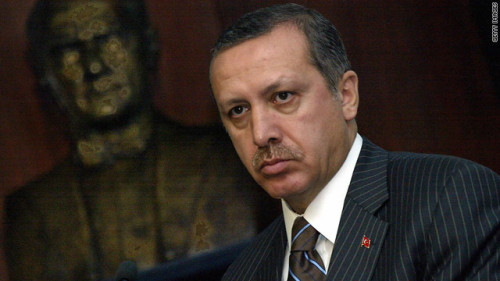 LATEST: At Least 18, Including 10 Children, Killed by Bombs Near School in Homs

Iraq & Syria Feature: Official — US Will Not Apply Strict Standards To Prevent Civilian Deaths From Airstrikes
Iraq & Syria Analysis: Britain Launches 1st Airstrikes — But Is There A Strategy?

UPDATE 1745 GMT: President Recep Tayyip Erdoğan has made Turkey’s position clear — and confirmed our analysis as to why Ankara hesitated in supporting US-led aerial intervention: his Government will only support action against the Islamic State, including permission to foreign forces to use Turkish bases, if that action also has the objective of removing the Assad regime:

We will never tolerate any terrorist organizations in our lands, in our region or indeed in the world. We are open and ready for any cooperation in the fight against terrorism. However, it should be understood by everybody that Turkey is not a country in pursuit of temporary solutions, nor will Turkey allow others to take advantage of it.

Erdoğan denied reports that Islamic State fighters have surrounded the Turkish enclave of the Suleiman Shah tomb in Aleppo Province. He said Turkey’s response to any such threat would be “clear and certain”.

UPDATE 1615 GMT: A media activist says 36 Turkish soldiers, guarding the Suleiman Shah tomb in Aleppo Province — formally Turkish territory, even though it is inside Syria — were briefly detained by Islamic State forces on Tuesday night.

“The arrest of the Turkish soldiers occurred under the watch of individual elements of IS,” said Adnan al-Hussein, the director of a media center on the Turkish side of the border. “But IS released them all Tuesday night and they returned back to their posts.”

Suleiman Shah was the grandfather of Osman I, the founder of the Ottoman Empire. His tomb is on the Euphrates River, 25 kilometers (16 miles) south of the Turkish border.

UPDATE 1245 GMT: Turkish “security sources” have told the Hurriyet newspaper that the safe havens in Syria, to be proposed by the Erdoğan Government to Parliament tomorrow, will include regions controlled by the Free Syrian Army and the Islamic Front.

The sources said the havens may be manned only by Turkish troops, although Ankara would prefer any safe haven to be established by U.S.–led coalition forces.

They said the havens will not include any part of northern Syria controlled by the Kurdish Democratic Union Party (PYD) or the Islamic State.

The Turkish Government is pursuing a general mandate for military intervention in Syria, including the despatch of troops, a buffer zone, and the opening of its bases to foreign forces.

Deputy Prime Minister Bülent Arınç confirmed to reporters on Tuesday after a Cabinet meeting, “The motion we are about to send the Parliament [on Thursday] is going to be comprehensive and to deal with today’s and tomorrow’s threats.”

Ankara hesitated earlier this month when it was pressed by the US to join the American aerial intervention against the Islamic State, refusing to allow US warplanes to fly from their bases in the country.

Possible reasons for Turkey’s reluctance varied. Some pointed to the Islamic State’s holding of 49 Turkish hostages, who were captured in Iraq in June and who have now been released.

However, the likely cause was Ankara’s unease with the type of campaign that the US has pursued. Turkish President Recep Tayyip Erdoğan continues to insist that intervention should seek the removal of Syrian President Assad, including a bolstering of insurgents far beyond that envisaged by Washington.

For Ankara, the situation has worsened in the eight days since the US launched its airstrikes, with the Islamic State continuing its advance on the Syrian border town of Kobane and capturing scores of villages. More than 130,000 Syrians have fled into Turkey, bringing the total number of refugees to more than 1.3 million.

So, as Ankara and Washington have continued to debate the scope of intervention, Erdoğan has spoken of a buffer zone inside Syria. Turkey has indicated that it wants the US to join it in providing aerial protection.

Deputy Prime Minister Arınç said on Tuesday that the Government’s request to Parliament will include sending troops to Syria and Iraq to establish “security zones”, as well as the opening of Turkish military bases to foreign forces. He answered the journalists’ questions of which measures would be proposed, “All. The motion will refer to all of these points you have asked.”

At the same time, Arınç noted the challenges for Ankara if it escalates its military involvement. He said that Islamic State fighters are advancing on a Turkish enclave inside Syria — the tomb of Suleyman Shah, the grandfather of the founder of the Ottoman Empire, in Aleppo Province — which is guarded by Ankara’s soldiers.

A pro-Government newspaper said on Tuesday that about 1,100 jihadists now surround the enclave.

Parliament will consider the Government’s motion in a closed session and is expected to vote by the end of Thursday.

“We are a determined government. We perfectly know what’s going on inside and outside Turkey. This issue of security zone and other issues all have diplomatic and military reflections,” he added.

At Least 18, Including 10 Children, Killed by Bombs Near School in Homs

Two bombs have killed at least 18 people, including 10 children, and wounded 56 near a school in Homs in central Syria.

An official said the first explosion was from a car bomb parked and detonated in front of the school, followed minutes later by a suicide bomber who drove by and detonated his vehicle.

State media showed brief clips of the aftermath of the attack, with parents looking for their children amid scattered schoolbags and blood on the ground as a car burned nearby.

Homs Governor Talal al-Barazi described the attack as a “terrorist act and a desperate attempt that targeted school children”.

There was no immediate claim of responsibility.

“Today, American jets hit a village that is 4-5 km (2-3 miles) southeast of Kobane and we heard they destroyed one [Islamic State] tank,” Parwer Mohammed Ali, a translator with Kurdish forces, said.

A Reuters correspondent on the Turkish side of the border say he heard jets overhead and saw a column of black smoke rising from the area.

A member of the council of Suruc, the Turkish town across the border from Kobane, said that Islamic State forces are “two to three kilometers away from the southeastern tip” of Kobane.

Video: The Refugees from the Fighting Near Kobane

Rami Jarrah speaks with some of the 130,000 Syrians who have fled into Turkey, amid the Islamic State’s offensive near the Kurdish center of Kobane in northern Syria:

Video: Fighting in al-Dukhaniya, Near Damascus

Footage of insurgents battling regime forces in the town of al-Dukhaniya, near Damascus:

In fight for control of territory near the capital, insurgents took al-Dukhaniya earlier this month, while the regime captured Adra and moved on Douma.

The battles implications both for the control of Jobar in northeast Damascus and for the regime’s offensive against insurgent-held areas of East Ghouta, trying to break the opposition’s ability to attack the capital.

Is “Khorasan Group” No More Than Sniper Unit in Insurgency’s Jabhat al-Nusra?

The US Government’s official story of last Tuesday’s missile strikes on the “Khorasan Group” — “Al Qa’eda-linked terrorists” posing an “imminent terror threat” to America — is under further pressure this morning after an investigative report by Al-Aan TV.

The US missiles killed more than 60 fighters of the Islamic insurgent faction Jabhat al-Nusra, as well as at least 14 civilians, in attacks on two locations in Idlib and Aleppo Provinces.

Al-Aan’s Jenan Moussa, visiting the scene of the missile attacks west of Aleppo, found Jabhat al-Nusra documents identifying 13 foreign fighters, including one of the men listed as “Khorasan” by the US, as a “Wolf Unit” — a group of specially-trained snipers.

One of the Jabhat al-Nusra fighters killed last week was Abu Yusuf al-Turki, who was recently shown training snipers in a video from the Islamist faction.

A media activist has told Syria Direct of life in the eastern city of Deir Ez Zor, largely controlled by the Islamic State.

The activist spoke of “a state of anxiety” because of restrictions: “the closing of all shops in Deir Ez Zor and its outskirts during prayer times (and those who don’t abide by this rule have their shops closed for five days); the prohibition of smoking in public, and those who are caught are crucified [non-lethally, i.e. suspended from a cross] and flogged 70 times in front of others”.

He said water is relatively plentiful because of the nearby Euphrates River, also securing electricity, and trade continues. Some residents are also working in oil refineries and on pipelines seized by the Islamic State.

President Assad met with a high-level Iranian delegation on Tuesday.

Tehran’s officials were led by the Secretary of the Supreme National Security Council, Ali Shamkhani. He has increasingly become the Iranian regime’s political “fixer” in the crises in Syria and Iraq.

Syrian State media gave a pro forma summary of the meeting, with discussion of the “strong relations between Syria and Iran and the importance of maintaining and bolstering the standing strategic cooperation between them” against “the spread of Takfiri terrorism, which now threatens all countries near and far”.

However, there was a message to the US to ensure its intervention against the Islamic State was acceptable to both the Syrian regime and Iran.

The two sides asserted that combating terrorism must be carried out according to international law, and that success in this regard requires unifying the efforts of the international community and cooperating with the countries in the region that are waging a war against this looming threat.

They also affirmed that combating terrorism requires abandoning the policies of double standards that are still being employed by the West and particularly by the United States, as these policies seek to implement covert agendas that do not serve the interests of the region’s people.

Assad also ruled out any cooperation with Turkey and the Gulf States who have supported Syria’s insurgents: “Combating terrorism cannot be carried out by states that contributed to establishing terrorist organizations, provided them with logistic and material support, and spread terrorism around the world.”

Al-Halqi indicated concern with the use of Iran’s $3.6 billion line of credit, arranged in July 2013. He said it needed to ensure “the flow of Iranian goods into Syrian markets, and provide these markets’ needs in terms of supplies, consumer products, and pharmaceuticals”.

Al-Halqi also tipped off worries over industrial production, infrastructure, and reconstrucation, as he “called on Iranian companies to invest and establish development projects in Syria”.

US: We Will “Greatly Increase” Intake of Refugees — From A Few Dozen to A Few Thousand

Obama Administration officials said Tuesday that the US will “greatly increase” the intake of Syrian refugees for permanent resettlement — from a few dozen to a few thousand.

However, the administration will not pursue a separate refugee program for victims of the conflict.

The officials said the State Department is reviewing more than 4,000 applications from Syrian refugees seeking permanent residency in the US.

More than 3 million Syrians — almost 15% of the pre-confict population — are registered refugees. Almost 6.5 million are displaced inside the country.