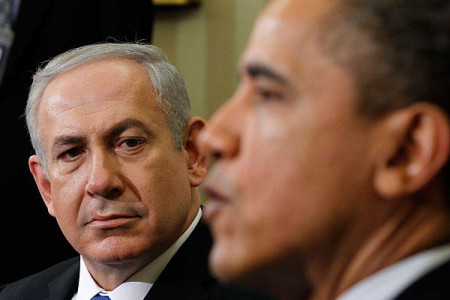 UPDATE 1545 GMT: The Obama Administration has distanced itself from its “senior official” who called Israeli Prime Minister Benjamin Netanyahu “chickenshit”.

Barkey offered a far more diplomatic portrayal of disagreement with Israel than that given by the senior official:

There are times when we disagree with actions of the Israeli government and we must raise our concerns, such as our concerns about Israel’s settlement policy.

We raise these concerns as a partner who is deeply concerned about Israel’s future and wants to see Israel living side by side in peace and security with its neighbours.

UPDATE 1200 GMT: Prime Minister Benjamin Netanyahu has responded to the declaration by a “senior US administration official” that he is “chickenshit”, as well as other criticisms from Washington. He told the Knesset:

When there are pressures on Israel to concede its security, the easiest thing to do is to concede. You get a round of applause, ceremonies on grassy knolls, and then come the missiles and the tunnels.

I am not prepared to make concessions that will endanger our state.

A renewed public row between the US and Israeli Governments is likely after publication of a lengthy article, detailing the animosity between Washington and West Jerusalem, in which a “senior Obama administration official” called Israeli Prime Minister Benjamin Netanyahu a “chickenshit”.

The remark to Jeffrey Goldberg of The Atlantic — “The thing about Bibi is, he’s a chickenshit” — is far beyond an outburst of a single official. Instead, it is part of the simmering five-year feud between President Obama and Netanyahu.

After the Israeli Prime Minister’s 1st visit to Obama in Washington, his officials told journalists on the flight back to Israel that the new US President was a weakling in international affairs.

Further insults have followed. This time they could be an epitaph for the doomed US efforts to restart an Israel-Palestine peace process or, at least, prevent the Israeli Government from further antagonizing the Palestinians with more Israeli Jewish settlements in East Jerusalem and the West Bank:

Netanyahu has told several people I’ve spoken to in recent days that he has “written off” the Obama Administration, and plans to speak directly to Congress and to the American people should an Iran nuclear deal be reached. For their part, Obama administration officials express, in the words of one official, a “red-hot anger” at Netanyahu for pursuing settlement policies on the West Bank, and building policies in Jerusalem, that they believe have fatally undermined Secretary of State John Kerry’s peace process.

In recent months, Netanyahu and his Ministers have used media leaks to ridicule the US Administration’s pursuit of the Israeli-Palestinian negotiations and to denounce Washington’s “threats” to take action over expanded settlements. During this summer’s 50-day Gaza War, they undermined US Secretary of State John Kerry’s efforts for a cease-fire, followed by talks over the future of Gaza.

Meanwhile, Israeli officials have portrayed the Obama Administration as soft on Iran, fearing that Washington and other powers will reach a deal with the Islamic Republic over Tehran’s nuclear program.

The “senior US official” hit back in the Goldberg article by portraying Netanyahu as a “coward”:

It’s too late for [Netanyahu] to do anything. Two, three years ago, this was a possibility. But ultimately he couldn’t bring himself to pull the trigger. It was a combination of our pressure and his own unwillingness to do anything dramatic. Now it’s too late.

The situation is so bad that Israeli Defense Minister Moshe Yaalon is now persona non grata in Washington because of his description of Secretary of State Kerry as “messianic” and “obsessive”.