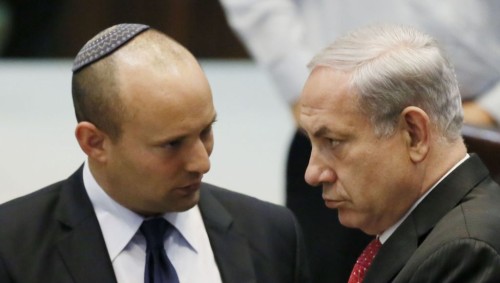 Economy Minister Naftali Bennett issued a warning to Prime Minister Benjamin Netanyahu on Wednesday: speed up the construction of settlements in the West Bank or Bennett’s Jewish Home Party will leave the Government.

Bennett, joined by Housing and Construction Minister Uri Ariel, met Netanyahu for “clarifications” over construction in the settlements, which they said had been essentially frozen over the past five months.

A “political source” set out Bennett’s challenge: if the construction is not expedited, Jewish Home’s members in the Knesset may absent themselves during a no-confidence vote scheduled for Monday.

A “source familiar with the meeting” said that Bennett and Ariel told Netanyahu that they expect an answer by Monday, as the Knesset opens its winter session.

Senior officials of Jewish Home and the Yesha Council of settlements claim that there has been an unpublicized freeze on planning and construction since early June. They allege that Netanyahu ordered Defense Minister Moshe Ya’alon to stop all development under the auspices of the Civil Administration, which controls planning and building everywhere in the West Bank except in East Jerusalem.

The departure of Jewish Home, which has three of the Cabinet’s 22 Ministers, may not bring down the Government but it would raise the image of instability amid rumors that Netanyahu will call a general election in early 2015.

Bennett was a vocal critic of the Prime Minister during this summer’s 50-day war with Gaza, claiming Netanyahu was holding back the Israeli military and calling for a re-occupation of the territory.

Wednesday’s car attack, running over passengers disembarking from a train in Jerusalem, was carried out by the nephew of a Hamas military commander who was assassinated in an internal Palestinian dispute in 1988.

Abdel Rahman al-Shaludi of Silwan in East Jersualem, 21, was shot and wounded after he hit the group at the Ammunition Hill station, killed a three-month-old infant and injuring seven other passengers.

Al-Shaludi’s uncle was Mohiyedine Sharif, accused by Israel of being a leading bombmaker.

Al-Shaludi has been a staunch supporter of Hamas’ armed wing, the Izz al-Din al-Qassam Brigades, on social media. He has frequently posted al-Qassam training videos on Facebook, condemned Israel’s restrictions on access to the Temple Mount/al-Aqsa Mosque, and called for the release of Arab detainees in Israeli prisons. He spent 16 months in Israeli prison in 2012-2013 for public disturbances, and was rearrested in February 2014.

The Palestinian Authority does not, never did, have a culture of peace, but rather a culture of incitement and jihad against Jews. It starts with Abbas’ lying statements from the UN, continues with persistent Palestinian attempts to delegitimize us in the international arena and ends with incitement in the Palestinian education system. These are the harsh consequences.

Economy Minister Naftali Bennet of the right-wing Jewish Home political party called for Israel to further assert its sovereignty over Jerusalem by constructing scores more housing units throughout the city. He linked yesterday’s attack to the ongoing unrest throughout Jerusalem, while criticizing the Government for its failure to quell incidents.

The funeral for the slain infant, Chaya Zissel Braun, was held in Jerusalem on Thursday. In his euology, Israeli President Reuven Rivlin cited an increase in Arab incitement in Jerusalem, which has “carried us all into a maelstrom of destruction and pain”.

He continued, “We are standing before a tiny, silent body….standing against haters and murderers whose hands slaughter without distinction, without mercy.”