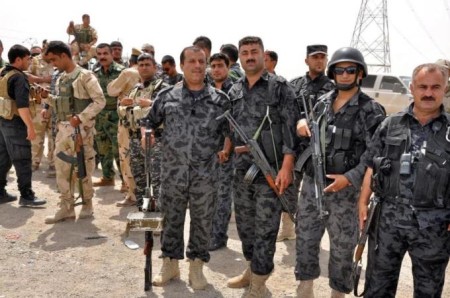 UPDATE 1600 GMT: The US has hit the Islamic State with airstrikes after took control of Tel Shair hill, west of the besieged Kurdish center of Kobane in northern Syria.

#Kurdistan: unbelievable pics of #IS fighters on Tell Shair, one moment they are there, the other moment they're gone pic.twitter.com/DnCSaiiaqw

“We have abandoned Tel Shair Hill,” said Faris Abu Ahmad, a commandant of the Free Syrian Army’s Revolutionaries of Raqqa Brigade, earlier in the day.

He said that the northwest sections of Kobane are under intense attacks, claiming 17 Islamic State fighters and two insurgents were killed.

The Iraqi Kurdish Parliament has approved the despatch of fighters to help defend the northern Syrian town of Kobane from the Islamic State.

The support of the peshmerga, who will move through Turkish territory and across the border to the Syrian Kurdish center, follows Iraqi Kurdish President Massoud Barzani’s decision to supply arms and ammunition and meetings with Syrian Kurdish leader Salim Muslim and with high-level US officials.

Despite Ankara’s agreement to transit for the peshmerga, Turkish President Recep Tayyip Erdoğan continued to snipe at the reinforcements on Wednesday: “I have difficulty understanding why Kobane is so strategic for [the Iraqi Kurds] because there are no civilians there, just about 2,000 fighters.”

Erdoğan also chided the US airdrop of supplies and arms to Kobane as a mistake, citing the seizure of 1 of 27 bundles by the Islamic State.

Salim Muslim, who heads Syria’s Kurdistan Democratic Union Party (PYD) was also less than satisfied, saying he had expected Syrian Kurds to be allowed transit through Iraq — and then through Turkey to Kobane — from other areas of Syria:

The issue of sending Peshmerga forces came up last week when I was in Dohuk. Earlier, we asked for support from whoever it could be. We asked Turkey to open a corridor to allow YPG forces in other regions [of northern Syria] to be able to come to Kobane. Now, we received some other sort of support.

Despite a meeting of 20 Syrian Kurdish factions last week in Iraqi Kurdistan, the PYD is concerned about the influence of other groups, some of whom are backed by Iraqi Kurdistan.

Muslim said the technical details of the entry of the peshmerga into Kobane are still being discussed between Iraqi Kurds and the PYD’s militia.

Inside Kobane, Kurds continued to fight the Islamic State, which moved into parts of the town more than two weeks ago. Journalists across the border in Turkey observed at least two US airstrikes on jihadist positions.

Turkish President Recep Tayyip Erdoğan has maintained his criticism of US airdrops of supplies and arms to Syrian Kurdish fighters defending Kobane.

Repeating his denunciation of any US support to the Syrian Kurdistan Democratic Unity Party (PYD), Erdoğan maintained:

We had said that there are commanders from the [Turkish Kurdish] PKK in the ranks of PYD fighting in Syria. We had said that any US aid to this group is going to a terrorist organization.

On Tuesday, Erdoğan said the US aid was a “mistake” because one of the 27 bundles was seized by the Islamic State. He went farther today:

Some of those weapons were seized by [Islamic State] terrorists. But the rest, they also were seized by another terrorist organization, the PYD. Turkey did never lean towards such military aid and the U.S. did that despite Turkey.

US Officials Confirm More Restrictions on Any Support of Syrian Insurgents

US officials have confirmed more restrictions on any training and arming of Syrian insurgents, saying they will only be able to defend territory and cannot retake it from the Islamic State.

Insurgents have fought the jihadists across northern and eastern Syria since January. While the Islamic State has expelled the opposition fighters from the east, the insurgents pushed the jihadists out of most of northwest Syria.

Despite the insurgent presence — including inside Kobane, alongside Kurdish forces — the US has ruled out any cooperation with them in its campaign of airstrikes against the Islamic State, begun last month.

The Obama Administration has approved the training and equipping of a force of about 5,000 insurgents; however, it said the process will several months.

US officials, criticizing the plan, said the new units will no be able to take territory without the help of forward-deployed U.S. combat teams, ruled out by President Obama.

“We have a big disconnect within our strategy. We need a credible, moderate Syrian force, but we have not been willing to commit what it takes to build that force,” said “a senior U.S. official” involved in Syria and Iraq operations.

“You cannot field an effective force if you’re not on the ground to advise and assist them,” a “senior U.S. military officer” explained.