Iraq Feature: How Many Tribesmen Did Islamic State Execute After Latest Victory in Anbar Province? 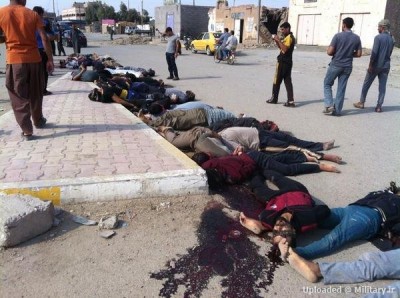 PHOTO: Claimed image of the mass killing of Albu Nimr tribesmen by Islamic State near Hit in western Iraq

Uncertainty continues over the scale of a mass execution of tribesmen by the Islamic State after their latest victory in Anbar Province in western Iraq.

Initial claims said the jihadists had executed 46 members of the Albu Nimr tribe after they captured the town of Hit, about 90 miles west of Baghdad. Later assertions have risen to more than 200, based on mass graves.

Supporters of the Islamic State put out photographs of the claimed executions earlier this week.

Members of the Albu Nimr tribe had fought for months to keep the Islamic State out of their area near Hit, about 90 miles west of Baghdad, but they were finally overcome earlier this month as the jihadists defeated Iraqi security forces.

A tribe member, Sabah al-Haditheh, said Albu Nimr had asked the Iraqi Government for military help and arms but received none: We put the responsibility on the government because they didn’t respond. We were fighting ISIS [the Islamic State] with rifles, and it was fighting us with heavy machine guns.”

A tribal sheikh said that, on Wednesday alone, more than members of Albu Nimr were lined up and executed with gunshots to the head.

The claims come as Human Rights Watch published a report documenting the Islamic State’s systematic execution of 600 detainees after it took over a prison near Mosul in its June offensive.

The jihadists have already claimed the execution of 1,700 Shia soldiers after they captured the city of Tikrit in June. Human Rights Watch subsequently established the mass killing and burial of more than 600 men.