Iran Feature: Rafsanjani v. The Hardliners — The Battlelines Are Drawn 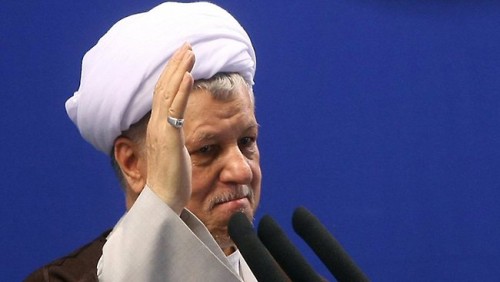 While most of the world’s attention to Iran is on nuclear talks and regional maneuvers in Iraq and Syria, an important power struggle is being waged inside the Islamic Republic.

Former President Hashemi Rafsanjani, whose political career was buried by some analysts amid regime in-fighting after the disputed 2009 Presidential election, resurged to become a leading force behind the Rouhani Government. Vocal on both domestic and foreign policy initiatives — such as “engagement” with the US and Saudi Arabia — Rafsanjani even ventured to press the Supreme Leader for the release of political prisoners, including opposition leaders Mir Hossein Mousavi and Mehdi Karroubi.

That resurgence has worried hardliners, who still consider Rafsanjani an appeaser — or even collaborator — over the “sedition” of the mass protests from 2009. So, while challenging the Rouhani Government, they have searched for a way to put the former President back in a political box.

The occasion for the showdown will be the election of the head of the Assembly of Experts, due in early 2015, to replace the recently-deceased Ayatollah Mahdavi Kani — the cleric who ended Rafsanjani’s leadership of the body in 2011.

The Assembly selects the Supreme Leader and has the nominal authority to replace him. However, its significance is more in symbolism than a role in policy: the election of its head marks out the factions and individuals who are “winning” the internal political contest.

If Rafsanjani triumphs, he would add the Assembly chair to his leadership of the Expediency Council, which rules on disputes between Iran’s executive, legislative, and judicial branches. And he would shake up the hardliners’ efforts to regain the upper hand through triumph in the Parliamentary elections in early 2016.

In September the hardliners were so worried by this prospect that they postponed the election to replace Mahdavi Kani, comatose after a heart attack in June. Instead, the deputy head, Ayatollah Shahroudi, was named interim leader.

Now that the vote can no longer be postponed, hardliners are promoting other candidates — one possibility was the Tehran Friday Prayer leader Ayatollah Movahedi Kermani — while dismissing Rafsanjani as a spent force.

The latest hardline attack came early this week when Ayatollah Ahmad Khatami, a member of the Assembly and another Tehran Friday Prayer leader, asserted that Rafsanjani would not stand in the election.

The former President was quick to respond. Not only did he say he was willing to stand, he said this would be essential if other “unacceptable” candidates — examples include a leader of the hardliners, Ayatollah Mesbah Yazdi, or Guardian Council head Ahmad Jannati — put their names forward.

Back came Khatami with a threat: if Rafsanjani continued his “media game”, then the cleric would ” break his silence and reveal secrets”.

Khatami said, “I have evidence to prove what I say is true. He as a member of Assembly of Experts has the right to take any decision regarding his candidature, but denying words that I quoted from him is not correct.”

Is there an escape from a showdown? One likely option is an agreement to accept Ayatollah Shahroudi as the new head of the Assembly — the former head of judiciary, close to the Supreme Leader, is a friend of Rafsanjani and would not be opposed by the hardliners.

That means an increasingly public sign of division within the regime, even as it faces a November 24 deadline for a nuclear agreement and the prospect of more economic hardship. And that division in turn could weaken Iran’s hand on matters beyond the country, such as the regional contest with US-led intervention and the worries about the Assad regime.