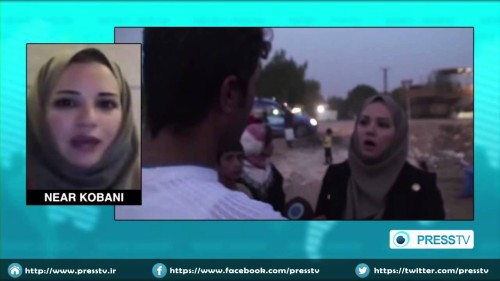 The death of a reporter for Iran’s State outlet Press TV, in a road accident, has provided the platform for Iran’s latest denunciation of Turkey.

Serena Shim, a US citizen of Lebanese origin, was killed on Sunday when the car in which she was travelling collided with a truck in Suruc in southeast Turkey. She had been reporting across the border from Kobane, the Kurdish center in northern Syria trying to hold off the Islamic State.

Press TV news director Hamid Reza Emadi spoke of the “suspicious death” as a tragedy for “anyone who wants to get the truth” — Slim had died because she “criticized a certain country that is creating chaos in the region by supporting terrorists both inside Syria and Iraq”.

We believe that the Turkish government has to be held accountable before the international community. It has to find out exactly what happened….

We are waiting to see whether the US government is reacting or asking Ankara for clarification.

Shim told Press TV on Friday that Turkish intelligence services had accused her of spying because she was among the first reporters documenting “Takfiri militants” crossing the Syrian border in “NGO trucks”.

While Turkey is one of Iran’s largest trading partners and has historically had good diplomatic links with Tehran, relations between the two countries have been strained in recent years, notably over the Syrian crisis.

Last week, Iranian officials — maintaining their support for the Assad regime — denounced Ankara for proposing “safe havens” across northern Syria from the Mediterranean to the Iraq border.

Prominent human rights attorney Nasrin Sotoudeh, released from prison last autumn after three years, has been given a 3-year ban on practicing law.

The Lawyer’s Disciplinary Court imposed the suspension on Saturday, reversing a decision in August to allow Sotoudeh to keep her license.

The August verdict reportedly drew criticism from the prosecutor’s office and Iran’s judiciary.

When Sotoudeh was given 10-year prison sentence in December 2010 — later reduced to six years on appeal — she was also punished with a 20-year ban on legal practice.

Head of Qods Force Soleimani: “Both US and Islamic State Doomed to Failure”

The head of the elite Qods Force, General Qassem Soleimani, told reporters on Monday that both the US and the Islamic State will be defeated in Iraq and Syria.

Soleimani, speaking on the sidelines of a cultural ceremony, said, “Both the US campaigns and the Islamic State terrorist measures are doomed to failure since they lack reality, and their approaches will not be effectual and victorious.”

Soleimani, significant in maneuvers on both the political and military fronts, has taken on a more prominent public profile in Iraq — where Iran claims it is essential in defeating the offensive of the Islamic State — in recent weeks.

Iran continued its high-profile shift in policy on Israel and Palestine on Sunday, with more celebrations of the visit of the leader of Gaza’s Islamic Jihad, Ramazan Abdullah.

Abdullah, who was received by the Supreme Leader at the start of his visit, had his latest meetings with Foreign Minister Mohammad Javad Zarif and with Speaker of Parliament Ali Larijani.

Hamas is the leading political party in Gaza, but its relations with Tehran have cooled, in part because of the Syrian crisis. A visit by Hamas leader Khaled Meshaal to Tehran, rumored for months, has not occurred.

Instead, the Supreme Leader uses his reception of Abdullah repeated his declaration that Palestinians must be armed to resist Israel.

Zarif declared on Sunday, “The Palestinians’ victory in that war and the previous victories of the brave Palestinian nation have proved the falsehood of the tales on invulnerability of the Zionist regime and its armed forces.”

In a shift of position, Iran has said there will be no extension of talks with the 5+1 Powers for a comprehensive nuclear agreement, even if a deal is not reached by a November 24 deadline.

Before last week’s discussions in Vienna, Iranian officials — including President Rouhani — had indicated that an extension could be arranged. However, at the end of the talks, Foreign Minister Mohammad Javid Zarif said no move of the deadline was envisaged.

Neither of the negotiating parties is interested in the extension of the talks. All sides are determined to achieve an agreement prior to the deadline. Therefore, extension is not on the agenda of any of the parties.

Araqchi said another meeting of technical experts from both sides will be held this week, with a view to another discussion between Zarif, US Secretary of State John Kerry, and the European Union’s Catherine Ashton by the start of November.

Iran has continued its political offensive with Lebanon, with Lebanese Defense Minister Samir Moqbel meeting President Rouhani — however, there has been no reference to the fate of Tehran’s proposed military aid to Beirut.

The Iranian offer, trying to counter $1 billion in assistance from Saudi Arabia, has been troubled by division within the Lebanese Government and pressure from the US and the Saudis. Lebanese Prime Minister Tammam Salam suspended Cabinet discussion on the proposal last week.

Moqbel and Iranian Defense Minister Hossein Dehghan discussed the matter on Saturday, but the account of Rouhani’s meeting was limited to the President’s declaration of support for “regional nations including the Syrian, Lebanese and Iraqi people and other nations that are in the war against terrorism”.

Secretary of the National Security Council Ali Shamkhani, who made the arms offer in a visit to Beirut last month, was more explicit in his meeting with Moqbel earlier in the day: “In addition to [its] readiness to [provide] the Lebanese army with weaponry assistance, the Islamic Republic of Iran is prepared to share its experiences for the promotion of security in Lebanon and the region and the fight against terrorist movements.”