Iran Daily, Oct 27: Rouhani — “We Will Deal With the Acid Attacks on Women” 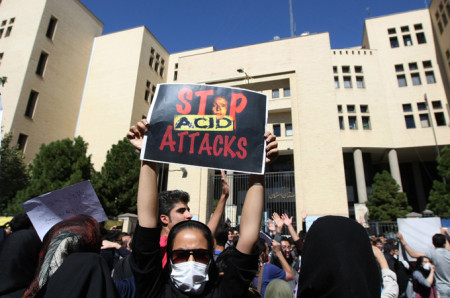 President Rouhani has pledged action to deal with a series of acid attacks on women, which have spurred public protests in Tehran and Isfahan.

Rouhani said after a Cabinet meeting on Sunday that the Government will pursue the cases “with all its might”, and that the attackers will be “harshly dealt with”.

The President said that the Interior, Intelligence, and Justice Ministers had delivered the initial report of their investigations to the Cabinet.

“The issue was an inhumane event, incompatible with any principles, and is the most heinous act that an evil person can commit in the society,” Rouhani said.

Several women were attacked in Isfahan earlier this month because of alleged “un-Islamic” dress and behaviour. Some have been disfigured and blinded.

The attacks came as Parliament passed legislation protecting those who challenge “un-Islamic” transgressions in public.

Thousands of Iranians reacted last Wednesday with street protests in Isfahan and Tehran, demanding the resignation of regime officials and the revocation of the Parliamentary law.

Rouhani indicated last Wednesday that he would challenge the legislation, but made no further statement about the bill on Sunday.

Brigadier General Hossein Sajedinia said police had detained a man in Tehran who threatened people by phone with acid attacks.

Sajedinia said the suspected admitted that he had been “influenced by foreign satellite channels”.

And the head of the judiciary, Sadegh Larijani, tried to distance the attacks from vigilante enforcement of “Islamic” behavior — he expressed regret that some Iranians attributed the “inhumane” assaults to the principle of “enjoining the good and forbidding the evil”.

Larijani said he had ordered his 1st deputy, Gholam Hossein Mohseni Ejei, to travel to Isfahan and take appropriate measures to identify and catch the culprits.

The regime’s high-profile publicity for the leader of the elite Qods Force, General Qassem Soleimani, continues with more front-page photographs of the commander operating in Iraq:

An EA source notes that Soleimani, who has been advising Iraqi political and military leaders amid the surge of the Islamic State’s offensive since the start of the year, is now “the poster boy for the Islamic Republic’s campaign in Iraq”.

Regime: “We’re Not Afraid of UN Human Rights Rapporteur” (But We Won’t Let Him Into Iran)

Mohammad Javad Larijani, a senior judiciary official, has said Iran is not fearful about visits by the UN Special Rapporteur on Human Rights — even though it has barred his entry into the Islamic Republic.

“We are certainly not afraid of Ahmed Shaheed’s presence in Iran,” Larijani told a conference on human rights in Tehran on Sunday.

Iran has repeatedly refused entry to Shaheed since his appointment in June 2011. The rapporteur has based a series of critical reports on Iran’s human rights on testimony of Iranians outside the country, as well as phone contact with those inside, in addition to documents and accounts from human rights organizations.

He claimed the former Maldives Foreign Minister was biased, insulted Islam, “fabricated documents”, and treated “terrorist suspects as advocates of human rights”: “We do not want Shaheed to be our friend, we only say that he should not take political stances against Iran.”