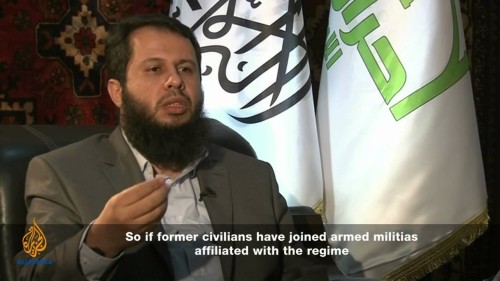 Hassan Abboud, a leader of the Islamic Front bloc and the Ahrar as-Sham faction, was killed on Tuesday night by an Islamic State suicide bomber.

Abboud and dozens of other commanders were reportedly slain by a member of the Liwa al-Dawood faction, which defected to the Islamic State this summer, named Hussein Muhammed Tamaa.

The commanders were meeting in Idlib Province to discuss strategy against the Islamic State, which has been fighting Syrian insurgents since January.

Abboud, the head of Ahrar as-Sham, took up a senior political position in the Islamic Front when it was formed in November 2013. He set out a state based on Islamic principles and protecting the rights of women and religious and ethnic minorities, setting it against the vision of the jihadist Islamic State.

In January, soon after battles broke out between the insurgents and the jihadists, Abboud blamed the Islamic State for the violence:

The Islamic State attacked our headquarters, held control of our weapons and properties, killed our prisoners who refused to fight them when they were attacked because of their belief in Allah….

We in the Islamic Movement of Ahrar Al-Sham and the Islamic Front have done all our efforts to contain the hard situation and to try to prevent any escalation….We have always called (on ISIS) to accept the Islamic Sharia as a judge between us.

Last month Abboud posted Twitter messages in English to criticize the Islamic State’s promotion of its beheading of US journalist James Foley, and to point out that many others had been killed by the jihadists:

It's very strange how the "IS" has been able to advertise gory executions and beheadings against the social media websites rules. #Foley

"IS" relies heavily on social media in order to spoil the image of Islam, attract new devotees and lure young people into their ideology.

So many executions & beheading incidents committed by "IS" against Sunnis. No one cares unless victims are of a minority or Yanks. #Criteria

The casualties pushed Tuesday’s death toll, reported by the opposition Local Coordination Committees, to 121 across Syria. Of the deaths, 50 were in Idlib Province and 44 in Damascus and its suburbs.