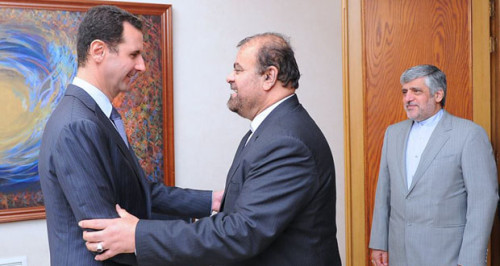 After a meeting with President Assad on Wednesday, Qassemi’s discussion with the head of the Syrian People’s Assembly, Mohammad Jihad al-Laham, features the same proclamation of “strategic Syrian-Iranian ties as key for preserving regional security and stability and defending the interests of the region’s people”.

But beyond the ritual statements, why is Qassemi in Syria? What does it say about the state of the Assad regime in the 42-month conflict?

One starting point is al-Laham’s declaration of “an Iranian ‘key role’ in the reconstruction process in Syria”, a task which matches Qassemi’s leadership of Khatam al-Anbia and its large projects in transport, energy, and infrastructure.

In areas such as Homs, where almost all insurgents were cleared this spring after more than two years of fighting, the Assad regime faces the task of rebuilding the devastated city. A smaller version of the challenge awaits in towns near Damascus which have either been reclaimed by the military or pressed into “reconciliation” agreements after months of siege.

But SANA — perhaps inadvertently — offers a clue to another, equally important reason for Qassemi’s visit: “Al-Laham…called for maintaining the credit line between the two countries for propping up the Syrian economy and providing essential goods for citizens.”

That statement is not of rebuilding Syria but of finding a way of fulfilling basic needs and services. Indeed, the reference to “maintaining the credit line” tips off a worry that Iran — which promised $3.7 billion in summer 2013 to ease the Syrian economic crisis — may not be able or willing to sustain the effort.

And there’s another curiosity in al-Laham’s statement: “Syria has promising, gigantic projects, particularly in oil and gas.”

Of course, Qassemi has vast experience in the energy sector, both with the Revolutionary Guards and as an Oil Minister.

But how exactly is Iran meant to invest in oil and gas when Syria’s largest fields, located in the east, are in the hands of the jihadist Islamic State?

The Supreme Military Council has claimed the destruction of the Wadi Barada tunnel, dating to 275 AD, near Damascus.

The tunnel was commissioned by Queen Zenobia to link Ein al-Fijeh with Tadmor in the Syrian desert.

The Supreme Military Council has announced a new mission for the Free Syrian Army in the insurgent offensive in Quneitra Province in southwest Syria.

Other insurgent factions involved in the Quneitra offensive, which has taken Quneitra city and many positions near the border with Israel, issued a similar statement on Thursday.

Mudar Hasan, an activist in Damascus, has been arrested over the launch of a Twitter campaign seeking awareness and answers about thousands of Syrian soldiers who have been killed or gone missing.

The catalyst for the campaign was the Islamic State’s capture of Tabqa Airbase, the last regime position in Raqqa Province in northern Syria, almost two weeks ago. After the victory, the jihadists posted video indicating that they had executed scores of President Assad’s troops.

The Weinun campaign was organized by young people afraid for the soldiers of the Syrian Arab Army. We lost thousands of them over the last two months, in A-Raqqa, Qalamoun, Mleiha and Jobar….

Of course responsibility falls first and foremost on the criminals who killed them, the terrorist organization the Islamic State. As for the responsibility for [Tabqa] airport’s rapid fall into IS hands, that rests on the Defense Ministry and the military leadership that headed up the operation rooms.

The spokesman says President Assad is a “symbol that cannot be touched”; however, the campaign is calling for the replacement of Defense Minister Fahd Jassem al-Freij — whom it calls the “Minister of Death” — with a prominent field commander, Colonel Suhail al-Hassan