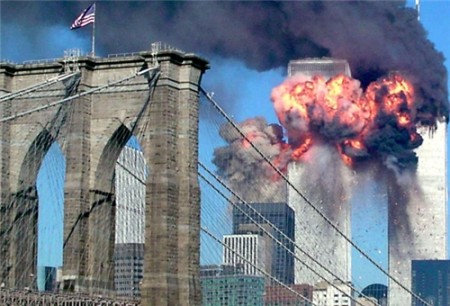 PHOTO: Fars News’ picture this morning of US treachery

President Obama’s declaration of a campaign to “degrade and ultimately destroy” the Islamic State has done nothing to halt Iran’s propaganda that the US created the jihadist threat in Iraq and Syria.

Fars News, the outlet of the Revolutionary Guards, features several articles this morning on its website. Among them is the assertion of the head of judiciary, Sadegh Larijani, that “everyone knows” the US created the Islamic State because “Western governments want to tarnish the image of Islam through the actions of the Islamic State and [Nigeria’s] Boko Haram militants”.

Speaking to high-ranking judiciary officials, Larijani tied the devious American effort to its “double standards and hypocritical policies like [those on] human rights issues”.

Larijani said Washington was not pretending that it is opposed to the Islamic State because of fears that the jihadists could strike the US:

If this group could gain victory [in Syria and Iraq[, the westerners would not have any problem with it, but now that this terrorist group has been defeated in Syria and Iraq, they are afraid of the future location that these terrorists want to go to.

Mohammad Reza Naqdi, the head of the Basij militia and a leading voice in the propaganda campaign against the US, repeated his allegations to militiamen on Wednesday:

The criminal US created, equipped and armed the Islamic State terrorist group with the help of wicked Britain and the child-killing Zionist regime, as well as the petrodollars of oil-rich countries.

They ordered it to carry out crimes and large-scale massacre of Shiites and Sunnis and disrupt their tranquility on the pretext of a sectarian Sunni war on Shiites.

Fars buttresses the allegations of US deceit and treachery with a lengthy commentary, on the 13th anniversary of the 9-11 attacks, claiming that the US Government carried them out and then blamed Al Qa’eda:

The events of 9/11 were tragic and huge. The body of evidence and the ever-growing number of facts that the US administration, the American-Israeli-European intelligence agencies, and many other extras were “possibly” involved, are also huge. The problem with summarizing this information is that the scale of the operation and its cover-up are also so vast. However, after all these years, the unanswered questions can still cut through the official accounts, the political “spin” AND the “deception” that changed the world as we knew it.

But what about President Obama’s speech on Wednesday night setting out expanded US airstrikes and support for ground operations against the Islamic State in Iraq and Syria?

Fars’ Persian-language site gives a lengthy answer, claiming support from Western sources, that Obama is only trying to cover up for the Americans’ creation of the menace that it is supposedly now fighting.