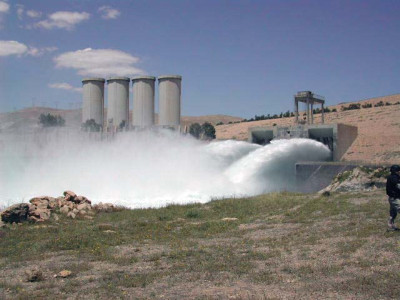 UPDATE 1745 GMT: A senior member of the Kurdistan Democratic Party claims that Kurdish forces now hold most of the Mosul Dam complex.

“Fighting is ongoing at the Mosul dam and we have caused big losses to the Islamic State. Now more than 80% of the dam is controlled by the Peshmergas,” said Abdul-Khaliq Babiri. “Within the next few hours we expect to clean up the area from the Islamic State and fully control the Mosul Dam.”

The US stepped up airstrikes on Saturday against the Islamic State to support a Kurdish counter-offensive in northern Iraq.

In its most significant operation since strikes began nine days ago, the American warplanes targeted Islamic State fighters near the Mosul Dam (pictured), as Kurdish forces tried to retake the complex

A Kurdish general said on Saturday that the peshmerga had moved into the western part of the Dam, Iraq’s largest. This morning, a field commander declared, “With the help of American fighter jets, the Peshmerga launched a wide-ranging attack….We have taken Telsqof and Risala villages and we are moving towards the Mosul dam.”

The US also hit Islamic State forces on their frontline 30 miles from the Iraqi Kurdistan capital Erbil.

The Mosul Dam was seized by the Islamic State on August 7. It provides electricity to much of northern Iraq and supports irrigation of farmland in Nineveh Province.