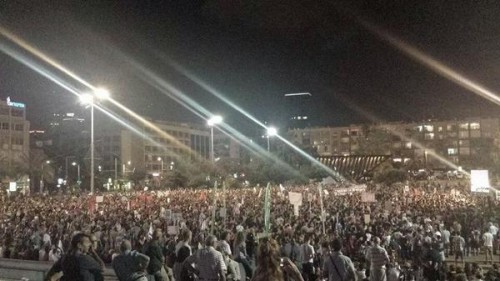 UPDATE 1100 GMT: Facing pressure from his Ministers, Prime Minister Benjamin Netanyahu has set out a defiant line as he opened the Cabinet meeting:

We are in the midst of a joint military and political campaign. The delegation in Cairo is operating under clear guidelines to stand by Israel’s security needs.

Only if there is an answer to these security needs will we reach an understanding. We are a strong and determined nation. If Hamas thinks that it can cover its military defeat with a political achievement, it is mistaken. As long as the quiet does not return, Hamas will continue to suffer very serious blows.

We must demand protection for the residents of Israel. We must make sure they feel safe, and we must not end the operation without them feeling safe. We must create an international arrangement that protects them.

Hamas is running the show, and we are being led by them. There is a very unpleasant feeling that Israel wants quiet at any price. This is a temporary quiet….We are giving Hamas international status. There is no victory on the ground.

This situation in which we are biting our fingernails as we wait for an answer from a murderous terror organization must end. We must stop the negotiations with Hamas immediately and take our fate into our own hands according to a simple formula: Humanitarian (aid) yes, terror no.

Israel has seen its largest anti-war rally since the start of its 40-day attack on Gaza, but there is no advance in talks trying to end the conflict.

The thousands gathered in Tel Aviv on Saturday night under the slogan ““Changing Direction to Peace — Not the Way to Wars”. They challenged not only the intervention in Gaza but the erosion of civil society in Israel.

(We) are losing our home to fanaticism and internal hatred….Dangerous movements are coming to pass in Israel because of the despair, the anxiety, nationalism and racism erupting all at once.

Not one word of condemnation has been uttered by the prime minister. It will be very difficult to rein in the dark forces….These processes and phenomena will unfortunately turn Israel into a radical, militant, xenophobic cult, isolated and ostracized.

Zehava Gal-on, the leader of the Meretz Party leader, called for an end to the blockade of Gaza and for the resignation of Prime Minister Benjamin Netanyahu.

Israeli authorities had prohibited gatherings of more than 1,000 people during the war, but they lifted the ban after a five-day ceasefire was agreed on Thursday. A large rally in support of Israelis in the south, who have faced rockets from Gaza, took place later that day.

Meanwhile, as Israeli and Palestinian negotiators consulted their home Governments, there was no sign of progress towards a full ceasefire.

Egypt tabled an 11-point proposal on Friday, which would ease the blockade of Gaza, establish fishing rights to six miles off the coast, and replace an Israeli buffer zone with Palestinian oversight — but only through cooperation between Israel and the Palestinian Authority, and not with the Gazan leadership of Hamas.

After initial mixed signals over whether it would accept the plan, Hamas’ opposition to the proposals coalesced on Saturday.

In a sign that the initiative was dividing Hamas and the Palestinian Authority — as Israel has been seeking, especially with its fear of a “unity” Government declared in April — Authority leader Mahmoud Abbas said there was no alternative to the proposal: “Egypt is not a mediator, rather a member of the negotiations, and there’s no one else who will come in its place.”

Senior Authority official Saeb Erekat met with Hamas leader Khaled Mashaal in Qatar yesterday to urge him to agree to the deal.

The indirect talks in Cairo are expected to resume today.