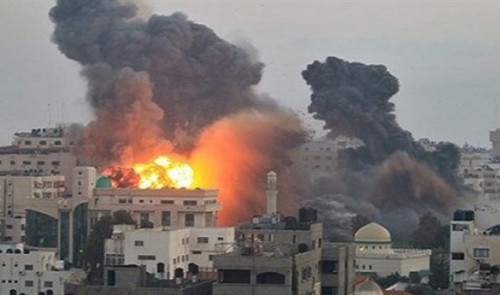 At least five Israeli airstrikes destroyed another of Gaza’s tallest apartment and office buildings on Tuesday, killing two people and injuring at least 20.

Seventy families lived in the 13-story Al Basha Tower, which also housed offices and a shopping complex. The targets appeared to be offices of the Ministry of Public Works and Hamas.

Last weekend, Israel levelled a 14-story high-rise with 44 family apartments and offices of the Ministry of Interior. Mosques have also been hit, with four more destroyed on Monday, bringing the total to 71 in the 49-day war.

At least 13 Gazans have been killed in Israeli airstrikes since Sunday night, with West Jerusalem promising an expansion of operations against Hamas leaders.

Freelance journalist Abdullah Mortaja, who previously worked for Hamas’s Al-Aqsa TV, was among the latest casualties. He was hit by tank fire in Shaja’ia, east of Gaza City.

The Gazan death toll is now at least 2,135. Israel lost 64 troops in its ground invasion, and three Israeli civilians and a Thai worker have been killed by Gazan rockets.

On the diplomatic front, talk circulated on Tuesday of another Egyptian-mediated temporary ceasefire, but without any substantive progress. Both Israel and Hamas said they were willing to consider a halt, but each alleged that the other side had not responded to their offers.

The last temporary ceasefire collapsed a week ago.