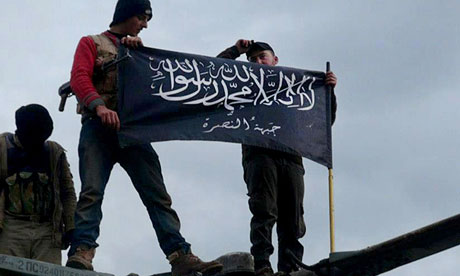 LATEST: Senior Military Officer: We Have Taken Key Town of Mleha, Near Damascus

Hope & Concern for Refugee Children in Turkey — & Those Still in Aleppo

Almost two weeks after the Islamic State declared a Caliphate, the leader of its rival Jabhat al-Nusra has purportedly proclaimed an Islamic Emirate in Syria.

An audio was posted on Friday night claimed to be of Abu Mohammad al-Joulani addressing hundreds of fighters and saying Jabhat al-Nusra — which broke with the Islamic State in spring 2013 over leadership of the jihadist effort in Syria — would implement sharia law, with courts formed within a week, “without compromise, leniency, ambiguity, or politeness”: “No one is exempt and anyone who refuses has no place among us.”

The audio on SoundCloud soon disappeared; however, other versions of the speech showed up on YouTube:

Al-Joulani supposedly said the new Emirate will confront all enemies, including the Assad regime, extremists like the Islamic State, and the Turkish-based Kurdish movement PKK. He promised, “We will not show leniency.”

The leader enjoined his fighters to renew efforts to establish Jabhat al-Nusra’s rule: “We’ll not allow anyone to reap the fruits of what you sow, whether they’re seculars, foreign or extremists. Today we’ll work hard.”

The Islamist faction has suffered losses at the hands of the Islamic State in recent weeks and has been driven out of almost all its positions in eastern Syria. It continues to work elsewhere with insurgents, although there are unconfirmed claims that it has pulled out of cooperation in Aleppo.

Senior Military Officer: We Have Taken Key Town of Mleha, Near Damascus

A “senior military officer” has told the Chinese outlet Xinhua that the Syrian army has moved into the town of Mleha, east of Damascus.

Mleha, a gateway into insurgent-held areas of East Ghouta, has been attacked by regime forces for months. They briefly moved into the center in May but were pushed out by insurgents and ambushed as they retreated.

The officer said Syrian forces had surrounded more than 400 fighters from the Islamist faction Jabhat al-Nusra.

US officials claim that Jordan is reluctant to host an expanded program of training for Syrian insurgents.

Some insurgents have been trained for more than a year in the Kingdom by forces from the US and allied countries, although the program has been limited by American restrictions seeking only to boost “moderate” units.

Washington has not made a formal request to the Jordanian Government for the expanded training.

“Jordan told the US, ‘No boots on the ground’,” said one of the officials.

However, other current and former American officials described the Jordanian position as less rigid and said they still hoped to convince Jordan to participate in the program.

The Jordanian Government, through its Embassy in the US, declined requests by Reuters for comment.

A Jordanian official in Amman said it was “premature to even suggest the Kingdom has rejected any such plan that even the Americans have yet to flesh out.”