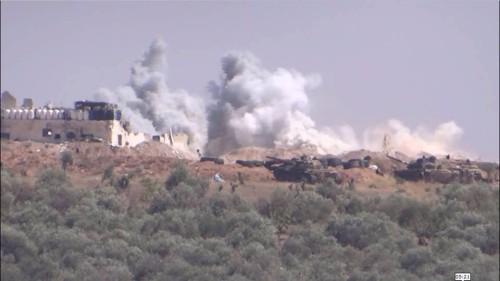 After weeks of defeats, both at the hands of the Islamic State and the Assad regime, insurgents hit back on Monday with an offensive in Idlib Province.

Renewing their strategy of cutting off regime bases and controlling the highway from Hama Province to the Idlib city of Maarat Numan, the Islamic Front and other factions attacked checkpoints near the Syrian military’s al-Hamidiyah base, destroying tanks and inflicting significant casualties.

In March, opposition forces used the same approach to cut off the Syrian military in southern Idlib Province near Khan Shaykhoun, attempting to seize territory as far north as Ariha.

The Syrian military has been reduced to two major bases in the province, al-Hamidiya and Wadi ad-Dief. The latter was hit by underground detonations in May.

State news agency SANA played down the offensive, claiming, “An army unit thwarted a terrorists’ attempt of attacking a number of military checkpoints in the surrounding area of Mohambel town in Idlib, killing or injuring its members.”

Hezbollah: We Need More Fighters to Face Insurgents in Qalamoun

The Lebanese organization Hezbollah has admitted that it and the Syrian military have not defeated insurgents in the Qalamoun region between Damascus and the Lebanese border, despite the success of a regime offensive between November and May.

Syrian forces were able to take cities and towns such as Yabroud and Maaloula, but have not vanquished insurgents who withdrew into the countryside.

“We need more fighters to launch an extensive attack against the rebels,” a Hezbollah official said. “Their numbers ranges between 5,000 and 10,000 fighters.”

The mountainous area of Qalamoun extends over a length of 70-80 kilometers and width of 30-40 kilometers. It is pocketed with caves and rough terrain where fighters can easily find hiding places.

Kurdish officials claim about 200 Islamic State fighters have been killed in their week-long offensive in and near Kobane, in northern Syria on the Turkish border.

The officials gave no estimate of Kurdish casualties.

Reinforced with advanced weaponry from successes in Iraq, including 10 tanks, other armored vehicles, and thousands of mortar shells, Islamic State forces took villages to the west of Kobane.

The Kurdish militia YPG claims it has retaken some of the villages as well as repelling the attack on Kobane.

The Kurdish officials claim the Islamic State is holding hundreds of civilians as hostages in Jarablus and Tal Abyad, including 130 Kurdish students returning from school examinations in Aleppo.

Claimed video of YPG militia in control of a village near Kobane (Ayn al-Arab):

The Islamic State has been attacking Kobane after seizing a number of villages in the area. The assault has caused significant casualties on both sides and prompted the Kurdish leadership to call on all Kurds in Iran, Iraq, Turkey, and Syria to come to the defense of the town.

Six weeks after the Syrian military broke the siege of Aleppo Central Prison, insurgents have launched an attack, taking two nearby buildings:

So far the assault has hindered regime access to the complex but is not poised for a renewal of the months-long siege.