Gaza Video: US Briefly Drops Its Mask – “Hell of a Pinpoint Operation” by Israel 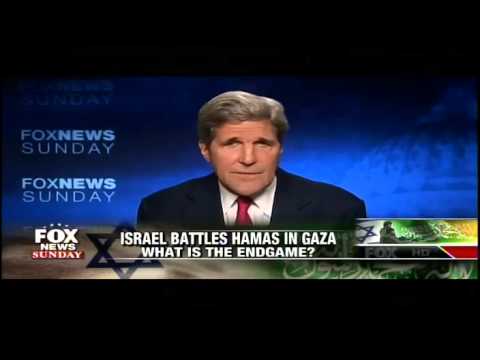 Throughout the two-week conflict between Israel and Gaza, the US has maintained public support of Israeli attacks. Indeed, since last Thursday’s ground invasion, Washington has stepped up the rhetoric — President Obama’s two phone calls to Israeli Prime Minister Benjamin Netanyahu have been promoted as condemnation of Hamas for violence and support of Israel’s “right to self-defense”, while US Ambassador Samantha Power denounced the Gazan leadership during a special session of the United Nations Security Council.

However, on Sunday the Administration’s mask briefly slipped to reveal its true feelings about the Israeli escalation, with hundreds of Gazans killed. During a pause in an interview with Fox News on Sunday, US Secretary of State John Kerry said, believing he was not on a live microphone, “It’s a hell of a pinpoint operation.”

Kerry told an aide, “We’ve got to get over there….I think…we ought to go tonight. It’s crazy to be sitting around.”

Put on the spot by interviewer Chris Wallace over the clip, Kerry returned to the standard US line: “We support Israel’s right to defend itself against rockets that are continuing to come in.” He blamed Hamas for the violence, claiming it was responsible for the catalyst — the deaths of three Israeli teenagers who were abducted last month — “It’s disgraceful.”

Kerry said, “War is tough” but made no further reference to Israel’s “pinpoint operation”.