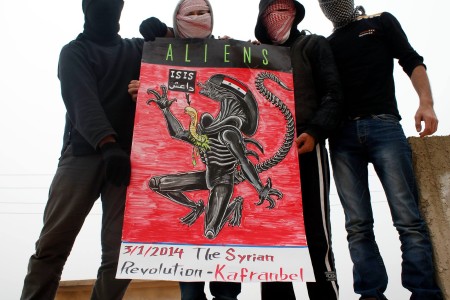 In the week since Al-Qaeda spinoff the Islamic State of Iraq and al-Sham brought Iraq back into international headlines by seizing around a third of the country in a matter of hours, there has understandably been a great deal of soul-searching and hair-pulling as to how a group that was supposed to have been “decimated”, in a country that was supposed to be last decade’s headache, has once again managed with just a few hundred men to humiliate an army many times its size and generally outfox the entire world.

Fingers have been hastily pointed in every direction, with culprits found ranging from the timeless “conspiracy” (in the Iraqi prime minister’s words) to Tony Blair (who took to his website Saturday to cantankerously declare his complete innocence of all charges). An increasingly widespread claim – appealing perhaps because of its ring of an ironic morality tale about imperial folly –– has it that ISIS’ growth is in fact the doing of the West’s closest but most duplicitous Arab allies, the oleaginous Gulf dictatorships, who have done to us once again what they’ve been doing since they backed the Afghan Mujahideen that nurtured Bin Laden in the 1980s. Will we ever learn?

Lost in this din, driven more by the grinding of old axes than dispassionate consideration of the evidence, is the obvious fact that one man has contributed vastly more than anyone else to getting ISIS where it is today: Syrian President Bashar al-Assad.

First, though, it’s worth exploring the Gulf hypothesis, because like any popular misconception, it does contain elements of truth. It’s unquestionably the case, as Josh Rogin argued in The Daily Beast on Saturday, that the Gulf monarchs make little if any real effort to prevent their more pious subjects from sending considerable sums of money to extremist outfits, including ISIS. That a Kuwaiti man named Ghanim al-Mteiri had no objection to going on the record to the New York Times in November about his financing of Jabhat al-Nusra, Syria’s official Al-Qaeda franchise, says everything that needs to be said about the Al-Sabah regime’s commitment to what Rogin still calls the “war on terror.”

But this is not the same as saying – as Rogin’s title (“America’s Allies Are Funding ISIS”) does, and as others such as Simon Henderson in Foreign Policy and Robert Fisk in The Independent have –– that ISIS is actively and deliberately sponsored as a matter of policy by the Saudis and other Gulf rulers and should be thought of as no more than a proxy created to advance Riyadh’s regional ambitions. Quite to the contrary: ISIS has long been at war with Saudi’s actual clients in Syria, the Islamic Front and what is loosely called the Free Syrian Army (FSA), who have successfully driven it out of much of its former turf in the north. Indeed, among the many sources of hostility between ISIS and the other brigades is precisely the former’s rejection of Saudi intervention. While FSA leaders openly express gratitude for Riyadh’s help, ISIS spokesman Abu Muhammad al-Adnani mocks the Kingdom as a “state which claims to be Islamic,” and denounces as traitors all factions “supported by the Saudis, America, and the infidels of the West.”

Another cause of friction is the FSA’s frequent accusations of ISIS collaboration with the regime.