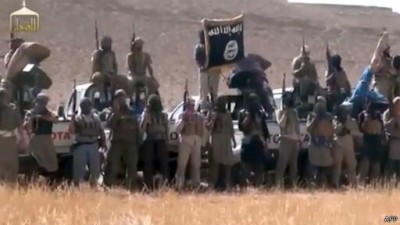 UPDATE 2025 GMT: The White House has confirmed that Vice President Joe Biden told Iraqi Prime Minister Nuri al-Maliki that the US is “prepared to intensify and accelerate security support”, in a conversation on Thursday morning.

Biden “underscored that it will be critically important for all of Iraq’s communities to reach a lasting political accommodation and to be united in order to defeat their common enemy”.

“We do have a stake in making sure that these jihadists are not getting a permanent foothold in either Iraq or Syria, for that matter,” Obama said during a White House meeting with Australian Prime Minister Tony Abbott.

The President did not specify what type of assistance the US would be willing to provide, although he said he had not ruled out any options.

State Department spokeswoman Jen Psaki later clarified that any aid would not include US troops, while “senior administration officials” said drone missions were being considered.

Meanwhile, White House spokesman Jay Carney denied that insurgents had taken the Baiji oil refinery, south of Mosul, on Wednesday: “We understand that that oil refinery remains in control of the government of Iraq but I don’t have any other additional information about that issue.”

UPDATE 1845 GMT: Thirty-one kidnapped Turkish truck drivers have been released, only to be abducted again, according to sources.

The drivers, captured Tuesday as fighters of the Islamic State of Iraq and as-Sham moved into Mosul, were freed, Turkey’s international transport association announced.

However, sources say another group seized the drivers after ISIS freed them.

The transport association said, “They are having some difficulties with the transport procedure at the moment, so it is not certain when they will exactly leave Mosul.

UPDATE 1750 GMT: Iranian sources, both via EA and via The Wall Street Journal, have said that elements of Iran’s elite Qods Forces are being deployed to shore up Iraqi security forces against the insurgent advance.

The sources indicate at least two battalions of the Quds Force, the elite branch of the Islamic Revolutionary Guard Corps, have deployed. Some of the fighters are in the Iraqi capital Baghdad and the Shia holy cities of Najaf and Karbala.

The Journal’s informants go farther with the claim — unsupported by any other source — that the Iranian assistance has helped Iraqi forces regain 85% of Tikrit, which fell to insurgents on Wednesday.

An Iranian general reinforced the statement of Iran’s police chiefs that troops have been stationed on the Iran-Iraq border. The general added that insurgent6 have been warned that they will be bombed if they close within 100 km (62 miles) of the frontier.

UPDATE 1700 GMT: A report from a businessman and father of 10 in Kirkuk, via The Guardian, as Kurdish forces secure the city:

Kurdish peshmerga have been in Kirkuk for a long time, but they did not have the prominent presence in the city like now. They have been massing more forces since yesterday. The (insurgent) fighters reached Kirkuk’s edges yesterday but they did not try to sweep to the city centre. This move by the fighters has alarmed the peshmerga forces and made them call up more numbers.

The new forces are deploying along Kirkuk’s borders and they have reached the Kirkuk irrigation project at the north side of the province. I just got back home after a trip to the city centre. The centre is full of peshmaraga patrols. They are moving the military equipment of the Iraqi army’s 12th brigade to Sulaimaniyia and Irbil provinces. This military brigade was too far away and they could not get any closer; that is why it fell to the peshmerga.

The fighters are mainly at Hawija town in Kirkuk, which is predominantly inhabited by Arab tribes. The (Iraqi) military forces have no control on this town, nor on the peshmerga.

The fighters in this town did not advance to the city centre – they might have another tactic and they did not want to clash with the Kurds now….

Yesterday evening the (insurgent) fighters liberated 47th battalion, which is part of 12th brigade, near Hawija town. Soon after the peshmerga moved their equipment to deal with fighters who were massing there but they sustained heavy losses and retreated. They tried today again but the resistance by the fighters was even tougher as they made use of the armoured vehicles that belong to the battalion to combat peshemrga fire.

We are all in state of alert. A curfew has been declared, from 11pm to 6am. There is an abnormal situation in the city. People are stockpiling food in panic and the prices jumped up at once. You can see queues of cars at fuel pumps.

No one is leaving the city, we are receiving families from Hawija town, Mosul and Tikrit.

UPDATE 1500 GMT: The Iraqi military has struck a tough pose, saying it is deploying special forces to regain Mosul from insurgents.

The military also said it has bombed the Ghazlani base, seized near Mosul on Tuesday by the opposition fighters.

There are unconfirmed claims of at least four Iraqi airstrikes on Tikrit.

UPDATE 1240 GMT: Iraq’s Parliament failed to reach a quorum on Thursday to vote on Prime Minister Nuri al-Maliki’s request for a national state of emergency.

Many Sunni and Kurdish MPs boycotted the vote, attended by only 128 of 325 MPs.

Sunni and Kurdish legislators have opposed the extraordinary powers claimed by al-Maliki, who is also Defense Minister, in recent months.

The capture came a day after opposition fighters, including those of the Islamic State of Iraq and as-Sham, moved into Iraq’s second city Mosul. The fighters also claimed Baiji, south of Mosul, taking a major oil refinery and blocking transport of much of Iraq’s oil through the north.

Later on Wednesday, insurgents approached Samarra, 70 miles north of Baghdad, from the northwest. They were pushed back by Iraqi security forces, who finally made a stand after melting away in both Mosul and Tikrit.

Some sources said insurgents had also advanced towards Kirkuk, home of Iraq’s largest oil refinery. However, other reports said Kurdish peshmerga had mobilized in the city to deter any attack.

Peshmerga also reportedly moved into Mosul’s civilian airport to keep it out of insurgent hands.

The New York Times claimed that Iraqi Prime Minister Nuri al-Maliki, who has said he would arm any civilian who wants to fight the insurgents, has repeatedly asked the US to launch drone attacks and airstrikes against the fighters since last month; however, Washington had turned down the requests.

In a May 11 meeting with US diplomats and the head of the US military’s Central Command, Maliki asked for Washingto to provide Iraq with the ability to operate drones. Failing that, Maliki said the US could carry out strikes using warplanes or drones.

Five days later, Maliki suggested to US Vice President Joe Biden that the Americans consider airstrikes. He followed up with a written request.

US National Security Council spokeswoman Bernadette Meehan reacted to the report, “We are not going to get into details of our diplomatic discussions.” She said, “The current focus of our discussions with the government of Iraq and our policy considerations is to build the capacity of the Iraqis to successfully confront (insurgents).”

The Turkish Government is also considering its response after more than 80 of its citizens, including 49 linked to the Consulate in Mosul, were seized by ISIS on Tuesday and Wednesday.

“All institutions of Turkey are on alert,” Justice Minister Bekir Bozdağ told Parliament.

News photographer Kamran Najm Ibrahim has been killed in clashes west of Kirkuk between Kurdish forces and insurgents.

Ibrahim was a co-founder of MetroGraphy, an agency of Iraq-based photographers and photojournalists.

Video: March of Iraqi Soldiers and Others Captured by Insurgents Near Tikrit

Footage from the United Nations of the departure of 100,000s of civilians from Mosul:

Footage of hundreds of volunteers in Baghdad, responding to Prime Minister al-Maliki’s call to mobilize against the insurgency:

Insurgent Spokesman in Mosul: Our Target is Baghdad

A spokesman for the al-Naqshbandiyya Resistance Movement, one of the insurgent factions in control of Mosul, has told The Guardian that Iraq’s capital is the target of the fighters:

Our fighters are advancing towards Baghdad without any significant resistance by the military forces. We are conducting negotiations with the army and police commanders as well as tribal leaders and they are coming over to our side.

The fight now is at Baghdad suburbs near al-Taji. We have prepared enough men and arms and have been waiting for this day for more then 10 years now….

The battle of Baghdad has started. We are prepared for any attack on Maliki’s collapsed forces or the Americans. We have pilots who are ready to fight and attack any spot in Iraq. Four airports have been liberated so far in Mosul and near Samarra.

Dindar Zebari, an official in the Kurdistan Regional Government, has announced in a press conference that approximately 500,000 civilians from the Mosul area have arrived in Iraqi Kurdistan, with about 180,000 in Dahuk and 100,000 in Erbil. He said the KRG will build three camps near the entry checkpoints of Erbil and Dahuk.

Jaafar Mustafa was returning from a visit to Kurdish units who have secured Kirkuk city and areas of the province when a roadside bomb exploded, killing a fighter, according Brigadier General Shirko Rauf.

US Vice President Joe Biden has called Turkey’s Prime Minister Recep Tayyip Erdoğan about the 81 Turkish citizens taken by the Islamic State of Iraq in Mosul.

Biden “underscored [that] the United States condemns the actions taken by [ISIS], calls for the safe and immediate return of the Turkish personnel and family members, and supports efforts by Iraqi national and Kurdish security forces to work together to combat the threat,” according to the White House.

United Nations Secretary-General Ban Ki-Moon, through a spokesman, invoked “the fundamental principle of the inviolability of consular premises” and called for “the immediate, unconditional, and safe release of those abducted”.

An Islamic State of Iraq and Syria commander has said that 49 staff and dependents of the Turkish Consulate in Mosul, abducted on Tuesday, are not at risk.

“The diplomats are safe and we are treating them well,” the ISIS commander told the Iraqi Kurdish outlet Rudaw.

The commander said the staff were removed from the Consulate because of the tense situation in Mosul after insurgents, including ISIS fighters, entered.

“We assure their safety and will return them to their country,” he said. “They have nothing to fear because they are Sunnis and of the Hanafi faith.”

The commander said the Consul was being kept inside the office of the Governor of Nineveh Province, and his staff and dependents — including three children and members of Turkey’s special force — at another location.

Rudaw reached ISIS after a reporter called the cellphone of the Consul and the commander answered.

“One of the diplomats has a dog with him and we provided food and water for his pet, too,” the commander said.