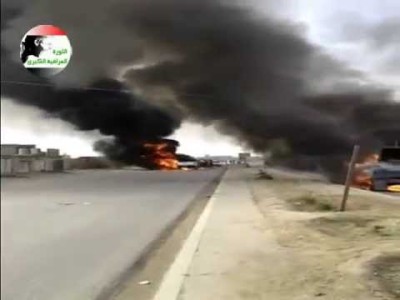 LATEST: 1st-Hand from Mosul “Armed Men Came to The House”

UPDATE 1900 GMT: An insurgent attack on Samarra, 70 miles north of Baghdad on the main highway from Mosul, has been repelled by Iraqi security forces.

Witnesses said fighters arrived at the northwest entrance to Samarra in trucks mounted with machine guns.

The demolition of a Shia shrine in Samarra in 2006 fuelled the Iraqi civil war.

Peshmerga forces also take control over the civilian airport in Mosul to keep it away from #SIS. #twitterkurds

UPDATE 1420 GMT: Insurgents have moved into Tikrit, 150 km (95 miles) north of Baghdad, according to security sources. 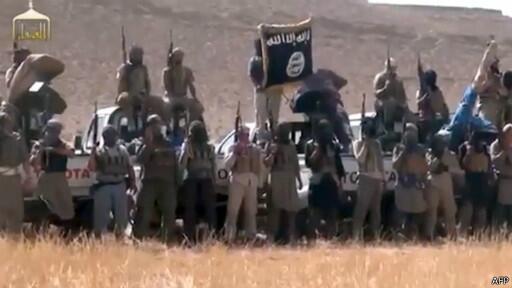 “All of Tikrit is in the hands of the militants,” a police colonel said of the capital of Salaheddin Province.

A police brigadier general said fighters attacked from the north, west, and south.

“Our forces were caught by surprise, they never expected ISIS would use police and army Humvee vehicles, we mistook them for government forces and it was too late to stop them,” said a police captain who fled from Tikrit to Samarra. “We are fighting devils and not ordinary people.”

Another police official said the insurgents had freed some 300 inmates from a prison in the city.

Pics of ISIS in #Tikrit city, now fully under their control. pic.twitter.com/HUzi2tv3KW

UPDATE 1330 GMT: Insurgents have seized the Turkish Consulate in Mosul.

The head of the diplomatic mission and 47 other Turks, including several Special Forces members and three children, have been abducted, a police colonel said.

Al Jazeera Arabic claims the personnel are being held in an Islamic State of Iraq and as-Sham headquarters.

“Certain militant groups in Mosul have been directly contacted to ensure the safety of diplomatic staff,” a Turkish government source said.

@EricAmiel13 Turks are not kidnapped.. They are only taken to a safe location and until the investigation procedures are completed..

@A_Landmesser @EricAmiel13 We are an Islamic State & we have to se if they did any crime against ISIS before..if not they are free

The phone lines of the Consulate were cut on Tuesday as insurgents took over Mosul, although Ankara may have maintained contact with Consul Öztürk Yılmaz via his cellphone.

Foreign Minister Ahmet Davutoglu has cut short his trip to the US and is returning to Ankara.

ISIS seized 32 Turkish truck drivers during the attack on Mosul. One of the drivers told the newspaper Hurriyet on Wednesday evening that the group expects to be released soon.

UPDATE 1100 GMT: Insurgents have occupied key points in the oil refining town of Baiji, 110 miles south of Mosul and 130 miles north of Baghdad, according to security officials and residents on Wednesday.

Government checkpoints in Baiji were abandoned after insurgents entered the city of 200,000 people in a column of 60 vehicles. The fighters have reportedly seized the Baiji power station, which supplies electricity to Baghdad, Kirkuk, and Salahuddin Province.

The insurgents offered safe passage to about 250 men guarding the major oil refinery on the outskirts of Baiji, on condition they leave.

Tens of thousands of residents have fled Iraq’s second-largest Mosul, as insurgents took control of all key facilities.

The fighters, including those of the Islamic State of Iraq and as-Sham, moved into the center as Iraqi security forces fled late Monday. By early Tuesday, they had taken Government buildings, TV stations, prisons — freeing an estimated 2,400 detainees — and the airport.

Reports claim the insurgents took more than $400 million from the banks. Videos showed captured equipment from the Iraqi Army, with other armored vehicles destroyed and burning.

Mosul is the capital of Nineveh Province in northern Iraq and a main route for the export of Iraq’s oil.

Iraqi Prime Minister Nuri al-Maliki asked Parliament to declare a national state of emergency and said he would give weapons and equipment to civilians willing to fight the insurgents “to defend the homeland and defeat terrorism”.

“We will not allow Mosul to be under the banner of terrorism, We call on all international organisations to support Iraq and its stance in fighting terrorism. The entire world will suffer if terrorism spreads,” Maliki said.

Sadr, who once ran the powerful Mahdi Army, said in a statement on Wednesday that he was ready to help create “peace units to defend the holy sites of both Muslims and Christians in Iraq, in cooperation with the government.”

Speaker of Parliament Osama al-Nujaifi, the brother of the Governor of Nineveh Province, said Parliament will discuss the call for the state of emergency on Thursday. He said he had asked the US Ambassador for help to stop “a foreign invasion by ISIL”.

State Department spokesman Jen Psaki said the US would support “a strong coordinated response”: “ISIS is not only a threat to the stability of Iraq, but a threat to the entire region.”

1st-Hand from Mosul: “Armed Men Came to The House”

Journalist Hassan Hassan passes on information from friends in Mosul:

Armed men, all Iraqis, came to their house and told them that if anyone hurts them or attacks them they should inform them. They gave a number to call in case of emergency. They appointed a mayor who made a decree to open all ministries there tomorrow and for offices to resume work and that he himself will go there and meet with people working.

They (the armed men) are all Iraqis, no Afghanis or foreigners like the media claims. He swears they are not ISIS (Islamic State of Iraq and as-Sham); they are Iraqi men. They didn’t even identify themselves as ISIS but kept saying that this is a revolution against injustice and that ISIS is what the media wants to believe to justify killing and bombing cities.

Iran Calls for International Response: “Terrorists Will Be Defeated”

Tehran has responded to the insurgent takeover of Iraq’s second-largest city Mosul.

Deputy Foreign Minister Hossein Amir Abdollahian said, “Terrorists and their supporters should know that as they suffered a major defeat in Syria, their measures in Iraq will also yield no result but defeat.”

Abdollah blamed “foreign sides” for involvement in the insurgency in Iraq: “Those sides which are supporting Takfiris should be seriously concerned about anti-security measures by this terrorist current in their countries.”

Like the US State Department, the Foreign Ministry called for an international response to the insurgent advance in northern Iraq.

“Given the worldwide threat of terrorism, it is necessary for governments and international bodies to stand by the Iraqi government and nation under the current critical situation,” spokeswoman Marzieh Afkham said.