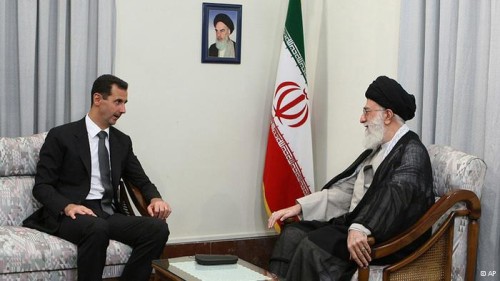 LATEST: Head of Military Repeats Warning to Government Over Cultural Issues and “Sedition”

The Supreme Leader’s representative to the Revolutionary Guards has offered a firm declaration of Iran’s support of Syria’s regime.

Ali Saeedi said on Tuesday, “Our spiritual front line is Syria. If this line breaks our security will face problems. For this reason, our defense of Syria is vital to our security, strategic, and political interests.”

Saeedi’s statement reinforces recent assertions by the Iranian military that the Lebanese organization Hezbollah is Tehran’s line of defense in the Middle East and must be maintained.

It also echoes comments made by senior Iranian representatives to American counterparts in private “Track 2″ talks in Europe. According to one of the US participants, former State Department official Frederic Hof: ”

Tehran’s fundamental reason for supporting the Assad regime was forcefully restated by the Iranian side. Lebanon’s Hezbollah is Iran’s “deterrent force” and first line of defense vis-a-vis Israel. Members of the Iranian team stressed that the “Assad regime” — not necessarily Bashar al-Assad personally — was essential (along with a supply corridor through Iraq to Syria) to maintain Hezbollah’s combat readiness….Alone among Syrian players, the Assad regime will do as Iran wishes with regard to supporting Hezbollah.

While the head of Iran’s military has put out the Supreme Leader’s message that nuclear talks must be supported, General Hassan Firouzabadi has continued the projection of strength against the US foe. He said on Tuesday, “The Americans today have confessed and accept that America has kneeled to Iran.”

That translates into a warning to the Government that the tough line on the cultural front — which has led the Supreme Leader to chide the Rouhani Government — must be maintained:

They thought one day that war with the Islamic Republic of Iran could take place like Iraq and Afghanistan. However, they know today that a war with [Iran] will engulf the globe; therefore they must destroy our power from within.

Today the culture of the Islamic Revolution is also threatened, in addition to the strength of military and equipment, doctrines, and tactics that were the enemy’s targets for espionage. Psychological operations and cyber network are also considered targets. We must know the enemy’s strategy.

The Supreme Leader’s representative to the Islamic Revolutionary Guards Corps, Ali Saeedi, has forcefully told the IRGC to stop criticism of the Rouhani Government over nuclear discussions.

Saeedi derided articles in Fars News that had sniped at “weakness” by Iranian negotiators, “Some media outlets that are affiliated with the IRGC, such as Fars News Agency, must observe the universality of news.”

Saeedi’s comment reinforces the statement of the head of Iran’s military, General Hassan Firouzabadi, that all factions must unite behind the Government as it pursues a deal with the 5+1 Powers.

Saeedi said, “What I think the Armed Forces General Staff Chief stated was that observations and criticism in the news must be accurate and appropriate….Lack of precision will cause us to pay unnecessary costs.

Tehran has responded to the insurgent takeover of Iraq’s second-largest city Mosul.

Deputy Foreign Minister Hossein Amir Abdollahian said, “Terrorists and their supporters should know that as they suffered a major defeat in Syria, their measures in Iraq will also yield no result but defeat.”

Abdollah blamed “foreign sides” for involvement in the insurgency in Iraq: “Those sides which are supporting Takfiris should be seriously concerned about anti-security measures by this terrorist current in their countries.”

Like the US State Department, the Foreign Ministry called for an international response to the insurgent advance in northern Iraq.

“Given the worldwide threat of terrorism, it is necessary for governments and international bodies to stand by the Iraqi government and nation under the current critical situation,” spokeswoman Marzieh Afkham said.

Iran and the US have concluded two days of nuclear discussions in Geneva, hoping to foster an agreement in next week’s high-level negotiations on a comprehensive settlement.

Iranian Deputy Foreign Minister Abbas Araqchi said, “We had good exchanges of views. We had good consultations. Of course, the differences and gaps still exist but before the next round of negotiations next week in Vienna….The atmosphere was good.”

Iran and the 5+1 Powers (US, Britain, France, Russia, China, and Germany) are seeking to conclude an agreement before the expiry of an interim Joint Plan of Agreement on July 20.

“We have to try more to make bridges between gaps,” Araqchi noted, “I think both sides now understand each other’s position more than before, but still we need more work to narrow these gaps.”