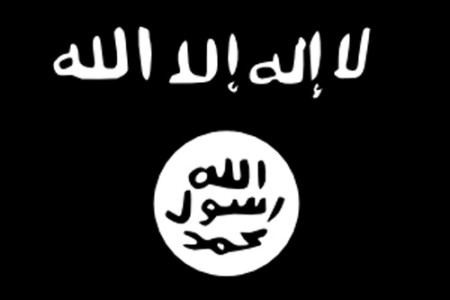 The Islamic State of Iraq and as-Sham made a dramatic political move on Sunday to accompany its military successes, declaring a Caliphate stretching from Diyala Province in eastern Iraq to Aleppo in northwest Syria.

Renaming ISIS as the “Islamic State”, the group’s leader Abu Bakr al-Baghdadi proclaimed himself Caliph Ibrahim: “We clarify to the Muslims that with this declaration of khilāfah (Caliphate), it is incumbent upon all Muslims to pledge allegiance to the khalīfah Ibrāhīm and support him (may Allah preserve him).”

The statement, read by spokesman Abu Mohammad al-Adnani, proclaimed, “The sun of jihad has risen….The borders are destroyed….The Muslims are glorified”:

By Allah, if you disbelieve in democracy, secularism, nationalism, as well as all the other garbage and ideas from the west, and rush to your religion and creed, then by Allah, you will own the earth, and the east and west will submit to you.

Residents say fighting continued on Monday on the southern outskirts of Tikrit, after Iraqi forces were repelled in their attempt to take the center of the city.

The Iraqi troops had reportedly withdrawn to a town 25 km (16 miles) to the south, after they were unable to get past booby-trapped roads to dislodge insurgents who took Tikrit almost three weeks ago.

Helicopters attacked the city overnight. There was no word on the snipers and special forces who were landed in Tikrit, including the University complex, last week.

State TV footage of a convoy with tanks moving towards Tikrit:

The Iraqi military spokesman, General Qassim Atta, has welcomed the declaration of a Caliphate by Baghdad’s foe, the Islamic State:

This declaration is a message by Islamic State not only to Iraq or Syria but to the region and the world. The message is that Islamic State has become a threat to all countries.

I believe all the countries, once they read the declaration will change their attitudes because it orders everybody to be loyal to it.

HRW says the incidents were part of a three-day assault from June 23 to 25, two weeks after the fall of Mosul to insurgents.

The residents said they heard from the few remaining villagers, all Sunni, that ISIS had killed at least some of the kidnapped men; however, none saw bodies or proviced confirmation.

The Lebanese TV station LBCI claims the Islamic State has appointed an Emir for Lebanon.

The channel claimed al-Ordoni gave instructions to a Lebanese intermediary between the Islamic State and the two suicide bombers who were intercepted last week at a Beirut hotel.

One bomber was killed when explosives were detonated. The other survived and has been detained.