Iraq: The Civilians Who Welcomed The Insurgents in Mosul 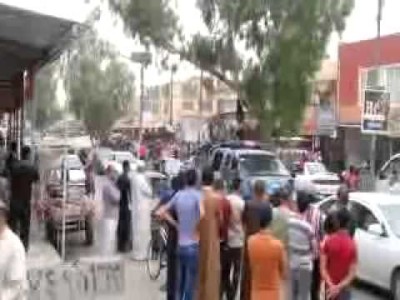 An estimated 500,000 people fled Iraq’s second city of Mosul (population: 3 million) as insurgents, including the Islamic State of Iraq and as-Sham, entered this week.

However, there were those who welcomed the coalition of ISIS, other insurgent factions, and local tribes who took control.

An ISIS parade in Mosul:

Niqash — “briefings from inside and across Iraq” — reports:

On Wednesday hundreds of people gathered in central Mosul to celebrate the arrival of the Sunni Muslim extremist group, the Islamic State of Iraq and as-Sham –– and in fact, to celebrate the group’s takeover of their city. The people of Mosul lined up on both sides of a parade organized by the extremist militia — the group were showing off their armoured vehicles, infantry carriers and weaponry — and began to chant congratulations.

The scene raised many questions. And in fact, the same scenario has happened in various other parts of Iraq where ISIS took over from the Iraqi government, currently headed by Prime Minister Nuri al-Maliki who is a Shiite Muslim.

Only a few hours previously, ISIS was seen mostly as a bloody-minded and terrifying organization, one with a long history of murder, extortion, kidnapping, and beheadings. These were acts that ISIS carried out almost daily. Even ISIS’s own affiliates in extremist organisation Al Qaeda had criticised them. But all of a sudden they were getting a very warm welcome in Iraq. So the question was: Why had the people of Iraq suddenly fallen in love with ISIS? What changed their minds and made them feel this way about an extremist group with such a bad reputation?

“ISIS released our women from al-Maliki’s prisons and they also released all the innocent prisoners,” says Ghanem al-Abed, one of the prime movers behind the Sunni Muslim protests held in Mosul’s own Tahrir, or Liberation, Square….“We didn’t ask ISIS to do that. They just did it by themselves. We have asked al-Maliki many times to release these prisoners. We have demonstrated and we have held strikes. We have demanded their release for many months. But al-Maliki never responded to our demands.”

Over the past six years there have also been plenty of complaints that the Iraqi Army under al-Maliki has become increasingly Shiite Muslim in its composition and leadership.

“So the people here feel relieved that they finally got rid of the federal government’s unprofessional military and police,” al-Abed told Niqash. “Most of the security forces were treating the people here according to which sect they belonged. They had no respect for our religion and they made our lives hell by doing things like closing roads, instituting curfews, making arrests and doing raids on homes.”

A Sunni Muslim group, ISIS seemed keen to show their awareness of this. On Thursday the militia distributed a two-page statement in Mosul. Niqash was able to obtain a copy. In the statement ISIS say they are seeking to revive the glories of the Islamic state and to make up for injustices practiced upon the Sunni Muslims of Iraq by the “Safavids” of Iraq. The description, Safavid, is an insult in these circumstances because it refers to the Safavid dynasty which ruled neighbouring Iran for centuries; basically the Sunni Muslim extremists are referring to Iraq’s Shiite Muslims. The ISIS statement likens the “Safavids” to snakes encircling the necks of Sunni Muslims.

The statement also assured the people of Mosul that they would be safe if they did not support anyone that ISIS described as a criminal. In the statement ISIS also said that the organisation had taken money from the city’s banks to prevent theft and looting, adding that, if they caught anyone doing anything like that, the punishment would be death or the amputation of a hand or hands –– this was the punishment prescribed under strict religious, or Sharia, law.

In the statement ISIS also said that local politicians, council members, government staff, soldiers, and police should repent. If they did so, they would be pardoned. This pardon, the statement said, was a one time only offer and if it was not taken up straight away, the punishment would be death.

Additionally ISIS said it would execute any person or persons who tried to form a council or organize a larger gathering –– only ISIS was allowed to do this. The same punishment would be meted out to anyone who carried a different flag or weapons. Again the punishment would be death.

And ISIS is not alone in Mosul either. In a telephone interview, Abdul Jalil, a prominent member of the Jaysh al-Tariqa al-Naqshbandia militia – also known as the Army of the Men of the Naqshbandi Order or JRTN –– confirmed this. The Sunni Muslim Naqshbandi movement –– which has links to Saddam Hussein’s former ruling Baath party — calls for an ongoing resistance against “Safavid” occupation of Iraq and is classified as a terrorist organization by many. Jalil told Niqash there were also other groups fighting alongside ISIS in the province of Nineveh beside his own. These included the military wing of the former Baath party and former officers in the Iraqi army under Saddam Hussein as well as tribal groups from the province. They were all fighting under the command of a body he called the Supreme Military Council.

As to why people had celebrated the arrival of a group like ISIS, Jalil told NIQASH that what was really going on was a popular revolution –– that was why local people welcomed these developments, he explained.

Despite the fact that various groups are claiming some part of the victory in Mosul, the situation on the ground makes it look as though ISIS is very much the party in charge. Their black flag is everywhere. There are even large banners around the city that say “Welcome to Nineveh”. Beside each one is ISIS’ black flag.

Local journalist Marwan Abdalla believes that what is going on in Mosul today is very similar to the situation in 2003, when US troops first arrived in Mosul. Many locals were overjoyed to see the US army take control of the city because they felt they had gotten rid of the dictator Saddam Hussein. Community leaders, both tribal and religious, negotiated a peace settlement with the US military and for around a year, the city was stable. However after that, the security situation in Mosul deteriorated again –– because Al Qaeda did exactly what their offshoot, ISIS, is doing now. They expelled the security forces and took control of the city.

But this time there is a difference, Abdalla notes. “ISIS is using a softer approach, a different strategy from that in 2004. It has learned from lessons of the past and it has a new philosophy when it comes to running territory it takes over.”

Some observers say those lessons also come from Syria, where extremist organisations like ISIS have had to deal with protests from the local population.

In Mosul, ISIS has appointed a veteran military man, Hashim al-Jammas, as interim governor for what they are calling the Nineveh wilayah – the latter is an Arabic word for a provincial division and stems from the word, wali, which means caretaker or custodian.

There is also a local administrative council made up of another group of veteran officers. And while these appointees are running Mosul, ISIS is attending to military operations elsewhere in Iraq.

Locals who remember how ISIS behaved –– and is behaving –– in Syria and Iraq’s own Anbar province believe that this honeymoon period will not last long. The reason that locals were celebrating ISIS’ arrival has more to do with the removal of the government forces they thought were more interested in antagonizing than protecting them. ISIS removed concrete barriers that had been blocking Mosul’s roads for years and locals feel happy there are no Shiite Muslims in town any longer, who are linked to the government in Baghdad and trying to control them.

However those feelings can surely only be temporary. When ISIS begins to impose its harsh laws and impose codes of behaviour –— preventing Mosul’s women from working, for example, or closing barber shops and banning smoking and alcohol –– Mosul’s people will doubtless become frustrated. And that frustration will turn to fear and regret when ISIS starts punishing people, beheading those they regard as criminals, or lashing them or amputating their limbs.

After all, right now, locals are probably still using the Arabic acronym for ISIS –– Daash –– without thinking too hard about it. But how will they feel when the first individual who calls ISIS “Daash” is punished for this? The extremist group has said that anyone caught using this everyday abbreviation will be punished with 80 lashes.